UH's Brennan reports state of the city is strong 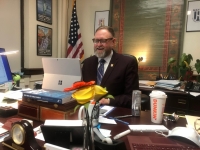 On Feb. 9, Mayor Brennan delivered his fourth State of the City address to University Heights residents.

In his fourth State of the City address, delivered Feb. 9, University Heights Mayor Michael Dylan Brennan played some greatest hits, before introducing songs from the new album. Or, rather, the newly re-elected mayor of University Heights offered new policy initiatives and events.

Brennan recapped some accomplishments of his first four years, including the creation of an Economic Development Department, the successes of the rebuilt Finance Department, and the new homes being constructed. Brennan said he’s especially proud of how the city “persevered through the pandemic,” while refocusing on racial and social justice.

“It is not a complete catalog,” Brennan said. “It speaks of greatest hits, and doesn’t even explore the deep tracks.”

Brennan asserted that he’d only just begun. “We are not here to rest on our laurels,” he said. “We are here to continue the relentless pursuit of seeking the best . . . and never being satisfied with anything less.”

Brennan said his “Putting People First” budget, which he proposed in January, reflects what residents already know—UH City Hall is obsolete, out of date and inaccessible. There is no gathering space for the community. The buildings for the city’s Police, Fire, and Service department are also woefully inadequate.

According to Brennan’s budget, UH City Hall, and its Fire and Police departments would ideally remain located at the current location, on the corner of Warrensville Center and Silsby roads. Additional property could be acquired for a comprehensive redevelopment, while the Service Department remains a candidate for relocation.

Residents want year-round senior and community programming, according to Brennan, and new facilities will allow that to happen. A new City Hall would be environmentally efficient and ADA-compliant, with community spaces. New buildings for fire and police will help serve the public more efficiently.

In response to residents’ demands, Brennan said, his budget will also modernize recycling in the city. “University Heights currently has one of the most inefficient recycling programs in Cuyahoga County,” said Brennan. “We aim to turn that around.”

Brennan’s budget provides for one 64-gallon recycling cart on wheels for every household in University Heights. “Residents may place their recyclables directly in the cart, loose, and without a blue bag,” he said. "The Service Department already has a cart flipper on hand for handling the carts.”

Brennan said the time to make this change is now. “We commissioned a solid waste study,” he said, “and have the expert opinion that this is the way forward. It is unlikely that future recycling bids will even offer the processing of bagged recycling.”

University Heights will host its first ever Juneteenth Celebration this summer, and the day will be recognized as an official holiday by the city government.

In keeping with the musical theme of his speech, Brennan played a video offering a preview of the city’s Summer Concert Series for 2022. The lineup will include returning favorites Old Skool, Back 2 The Future, and the University Heights Symphonic Band, plus bands that are new to the series, including the Michael Weber Show, Flannel Planet, Rubix Groove, Oregon Space Trail of Doom, and One World Tribe.

Carlos Jones and the PLUS Band, as well as Diana Chittester, will return for Fall Fest on Oct. 2.

Brennan also hinted at new development. “Tonight, I cannot yet share more [details] about them,” he said. “You will learn about them soon. They will be transformative in this city.”