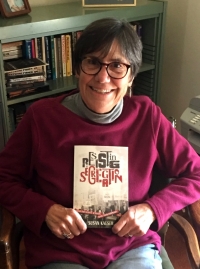 Cleveland Heights was not always the inclusive community it is today. From the 1920s through the early 1960s, it was unwelcoming and even hostile to non-whites. Through a variety of tactics, the city was kept almost exclusively white.

Her book, available at Mac’s Backs-Books on Coventry, documents the struggle to end segregation and integrate the city of Cleveland Heights. It chronicles the history of ordinary citizens who demonstrated that creativity and like-mindedness can bring about dramatic and substantial change.

All are invited to join the program. For the Zoom link, send an e-mail to blackcaucus@fhcpresb.org.

For decades, restrictive covenants and practices kept Blacks, Jews, and other non-whites out of Cleveland Heights, as well as other neighborhoods throughout the country. Kaeser’s book chronicles the history of that segregation, and the grassroots struggles waged by citizens, Black and white, to transform Cleveland Heights from a segregated city into an inclusive one.

In a 1946 publication of Seattle’s Civic Unity Committee, racially restrictive covenants were defined as “agreements entered into by a group of property owners, subdivision developers, or real estate operators in a given neighborhood, binding them not to sell, lease, rent or otherwise convey their property to specified groups because of race, creed or color for a definite period unless all agree to the transaction.”

The Fair Housing Act was introduced in 1966, thanks to pressure from Martin Luther King Jr., and other civil rights leaders. But, for two years, the bill went nowhere. One day after King's funeral, in his honor, Congress finally passed the Civil Rights Act, also known as the Fair Housing Act, in 1968.

King believed in ending poverty, war, militarism, and racism in all its forms. Kaeser’s book reminds us of the principles King held dear, and encourages us to carry on his work and values. She reminds us of a time when people of goodwill, regardless of nationality, race, creed, or color, banded together to extinguish de jure segregation (practices that are legally recognized regardless of whether the practice exists in reality) and de facto segregation (situations that exist in reality, even if not legally recognized).

A transplanted New Yorker, Quentin Smith is a former prosecutor, community organizer and high school teacher. He is co-chair of Black Caucus of Forest Hill Church, Presbyterian, one of the two sponsors for the Jan. 25 event.