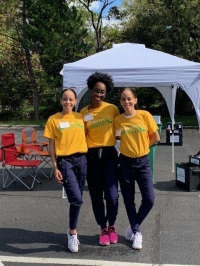 When we think of blood pressure and burgers together, it’s usually not for a good reason. Two Heights High graduates put a positive spin on the combo, however, at an October health-screening event held at Monticello Middle School.

Twin sisters Jen and Jessica Macklin both had participated in the Career Technical Education program in pharmacology when they were students at Heights High. They graduated in 2003, and went on to earn doctorate degrees in pharmacy.

At the "Wealthy Heart" mobile event on Saturday, Oct. 9, several dozen families from Boulevard, Noble, and Oxford elementary schools passed through stations where they had their blood pressure and glucose checked, received information about hypertension and diabetes, and partook of a healthy lunch of their choice of burger—chicken, turkey or veggie—as well as fruit and baked chips. They also received gift bags containing sanitation packs and T-shirts. A COVID information station provided answers to questions about the vaccines.

Anyone who had high blood-pressure or high blood-sugar readings received follow-up calls from Drs. Macklin, providing additional resources and next steps. The two sisters were aided by another 2003 Heights graduate, Monique Carter, a nurse.

Meghan McMahon, coordinator for the district's 21st Century program, described the two doctors as “dynamic," and noted, "their energy level is just awesome.”

Next, they've been contracted to run a six-week program, Healthy Science Lab, at Noble Elementary School, in which they will teach students the science behind cooking, and how to incorporate healthy foods into their diets.

Krissy Dietrich Gallagher, a longtime resident of Cleveland Heights, is a freelance journalist under contract with the CH-UH City School District.