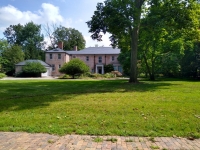 Julius and Carrie Feiss were the original owners of 1672 Oakwood Road.

Earlier this year, Cleveland Heights gained its 15th district on the National Register of Historic Places, when the Oakwood Club Subdivision Historic District was listed for its historic and architectural significance.

Founded in 1905, on Warrensville Center Road, the Oakwood Country Club served as a social and recreational center for some of Cleveland’s most prominent Jewish families.

After building a beautiful clubhouse and completing the 18-hole golf course, club leadership turned its attention to developing a private street of grand homes for its members, along the red brick Oakwood Drive.

The families hired prominent Cleveland architects to design their homes. Among them was the firm Howell and Thomas, which was responsible for significant public and private buildings throughout Cleveland, including residences in the Euclid Golf, Ambler Heights and Inglewood neighborhoods of Cleveland Heights. The firm designed seven of the 15 homes in the Oakwood subdivision, all of which were completed between 1918 and 1959.

All were associated with significant Cleveland companies, such as men’s clothing manufacturer Joseph & Feiss Co., the Cleveland Stock Exchange, Empire Plow, and women’s apparel maker Printz-Beiderman. The beautiful street served as a safe enclave, free from the discrimination many of these Jewish families faced elsewhere in the community.

Current Oakwood Drive homeowner Diane Calta said she and her neighbors have a “deep interest in preserving the history” of their street, and saw the project as a way to peel back that history

She and her neighbors spent four years on the designation, hiring preservation firm Naylor Wellman to complete the application.

They see listing the street on the National Register as a way to preserve its heritage and increase property values.

Said Calta, “We are committed to our properties and their stories. It’s a unique street and we take pride in it.”

Mazie Adams is a lifelong resident of Cleveland Heights, a supporter of the Height schools and chair of the city's Landmark Commission.