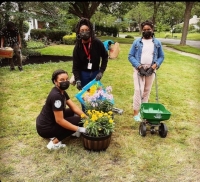 When Heights High students and recent graduates joined with youth leaders this summer to freshen up the lawns of Heights seniors, everyone benefitted. The teens learned landscaping and professional business skills; neighborhood yards were beautified, and, in one case, a woman’s slide into depression was averted.

The program, WAVE: We’re A Village of Efficacy, is the brainchild of community leaders Steve Walker and Jerod Johnson. The two have worked together for years with children and teens in the Heights, teaching, mentoring, and guiding them as they improve both their neighborhoods and their lives.

In collaboration with the city of Cleveland Heights and its Office on Aging, elderly homeowners in need of yard work were identified. Using Community Development Block Grant funds, the Parks and Recreation Department facilitated the purchase of tools, equipment and plants. The city also provided storage space for equipment in between jobs.

Various staff at Heights High helped identify students who would enjoy and benefit from participating in a yardwork project called Bridging the Gap. In all, 24 young people rehabilitated the yards of eight homes throughout the Heights.

Because Walker and Johnson wanted the students to experience landscape work from start to finish, they and the student participants first met with homeowners for an evaluation of their yards and to hear their preferences, such as favorite colors and flowers, how they hoped to use their space, or specific safety concerns.

“It was crucial to get their input,” said Walker, “but we also wanted to promote the social-emotional piece for our kids. Those conversations helped [the students] practice communication skills, build self-confidence, and inspire leadership.”

The students then crafted designs, and purchased the necessary materials. On Fridays, a minimum of six students would spend four to eight hours working at a residence.

For Barbara Taylor, the experience was transformative. Like so many, she described the past year and a half as “long, depressing, and horrible.” She had hired a landscaper to fix up her long-neglected yard, but once he was paid up front, he never returned. “I can’t describe how despondent I was. I felt depressed every time I looked out the window," said Taylor.

Taylor called the Office on Aging, and staff recommended the WAVE group. “Within a week, they were here," Taylor said. "These kids were just astounding.”

The one thing she wanted to keep was the overgrown rose bush her mother had planted 40 years ago. “They brought another to put next to it, and I nearly cried. When these guys came over, it was like the heavens opened up. They were such cool kids and did such a good job,” said Taylor.

Johnson and Walker hope to expand the program to include more homes, and provide long-term maintenance care. Johnson suggested the possibility of making the program year-round, with leaf raking and snow shoveling in fall and winter.

Both men were proud of how the program broke down generational barriers, hence the name Bridging the Gap. This experience enabled young and elderly people to get to know one another and interact on something positive and meaningful.

Krissy Dietrich Gallagher, a longtime resident of Cleveland Heights, is a freelance writer under contract with the CH-UH City School District.