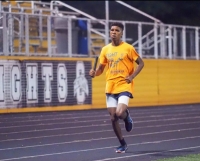 Members of the cross-country teams at Monticello and Roxboro middle schools joined Heights High’s cross-country and track runners for a 24-hour relay at Heights High on Aug. 7 and 8. Raising funds for the Cleveland Heights Running Boosters, the students ran 250 miles during the 24-hour period.

They arrived at the track on Saturday morning, carrying tents, sleeping bags, board games, and playing cards. As the clock struck 9 a.m., they began logging their miles, one or sometimes two students running four laps at a time before handing the baton off to the next runners. All participants ran more miles than they had before, and some ran faster than ever, including junior Henry Turner, who logged a personal best in his seventh mile, then beat that pace in his eighth.

The teams were led by senior captain Braedan Gallagher who kicked off the relay, running a mile every hour on the hour until he completed a full 24, logging the first 12 at a sub-5-minute pace.

Ella Bain, a Roxboro eighth-grader, spent the night at the track, running a total of 11.5 miles, her most ever. “It was kind of intimidating at first because there were juniors and seniors there,” Bain said. “But everyone was super nice, and I had no idea I could push myself that hard.”

Coach Scott McNulty was impressed with his kids. “Running for 24 hours is obviously a hard thing to do,” he said. “But we had so much support, some kids there the entire time, some showing up in the middle of the night to help out. We more than exceeded our goal and will now be able to take both the middle- and high-school cross-country and track teams to out-of-town meets.”

The Boosters raised over $17,000 at the relay, which will help pay for indoor track fees, warm-up gear, and expanding youth running programs to the district’s elementary schools.

Student runners were joined by alumni, parents, teachers, administrators and community members. Steph Buda, Heights High science teacher and coach, ran an entire marathon on the track, 104 laps, with a friend or colleague at her side. Because of the heat and humidity that day, she split her distance into a 13-mile run in the morning and another 13.2 after the sun went down.

Before the sun set, the skies opened up with rain, leaving behind a rainbow that stretched over the high school for about an hour, reinvigorating the runners as they prepared for the long night ahead.

The runners had support from the community, including parents who volunteered for overnight shifts and donated food. Dave’s Cosmic Subs on Coventry provided sandwiches, The Fairmount Wine & Martini Bar donated pasta dinners, and the Cedar Lee Business District delivered much-needed Gatorade. Twenty-four Northeast Ohio businesses, including The Wine Spot and Voodoo Brewery, each sponsored one of the 24 hours.

As the sun began to shine on Sunday morning over a weary bunch of teenagers, Coach McNulty gathered them on the track and sent the entire team around for one last lap. Some shuffled, many moved slowly, and a fair number were in their Crocs and pajama pants, but there was plenty of smiling and cheering for all they and their teammates had accomplished.

Krissy Dietrich Gallagher, a longtime resident of Cleveland Heights, is a freelance writer under contract with the CH-UH City School District. Her son Braedan is a member of Heights High's cross-country and track teams.