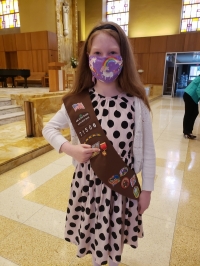 Girl Scouts of the USA (GSUSA) awarded Elizabeth (Ellie) Costanzo, a Girl Scout Brownie, its Medal of Honor for saving the life of a family friend last year. The Girl Scout Medal of Honor is presented to Girl Scouts who have performed acts of heroism beyond the degree of maturity and training expected for their age.

Jane Christyson, CEO of Girl Scouts of North East Ohio (GSNEO) presented Costanzo with the award, along with a congratulatory letter from GSUSA, in a ceremony at Church of the Gesu in University Heights, on May 3.

While visiting her grandparents’ lake house last summer, Costanzo was standing on the dock with her siblings and two family friends. Her brother was fishing on the dock and had a bite on his line; but soon after the fish bit, it swam under the dock. One of the friends, who was 3 at the time, bent down to look at the fish and fell into the water. Costanzo saw that he was having trouble breathing and struggling to stay above the water. Knowing she was able to stand in the water herself, Costanzo jumped in and pulled him out, putting him on the dock’s ladder. From there, family members were able to pull him completely out of the water and on to the dock to safety.

“Because of her quick thinking and willingness to jump right into action, someone’s life was saved,” said Christyson. “It takes courage and confidence to do what she did, and we are happy to present her with this national award.”

Training in health and safety is part of the Girl Scout program. A Girl Scout, because of the Promise and Law to which she has subscribed, is expected to be resourceful, skilled and competent; to have presence of mind and be of service to others. Many factors are taken into consideration in determining if an act is of unusual bravery beyond that which is expected of a Girl Scout.

Between 1998 and 2020, GSUSA has bestowed this honor on more than 500 Girl Scouts, and GSNEO has recognized 11 of its own scouts with this national honor. On May 3, Costanzo joined their ranks.