A roadmap to electing a new CH mayor 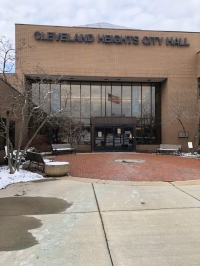 On Nov. 2, CH voters will directly elect a mayor, for the first time in the history of the city.

On Nov. 2, Cleveland Heights residents, for the first time, will directly elect their mayor.

In November 2019, voters overwhelmingly approved (with 64 percent voting in favor) the Issue 26 charter amendment, changing the city’s form of government to a mayor-council structure from what had been a council-city manager form.

The new mayor—who will now be directly elected by the city’s voters, rather than chosen by the city’s council members from among their own ranks—will appoint a professional administrator to help run the city, and work alongside CH City Council.

In the lead-up to the fall election, detailed below are some key dates and provisions of the new charter amendment regarding the process of electing a new CH mayor.

The mayor: The mayor is elected in a non-partisan race every four years, beginning in 2021, with no term limits. The mayor serves as full-time CEO of Cleveland Heights, and as the city’s safety director. (The safety director is an unpaid role for the mayor. It was formally the role of the city manager.)

The mayoral salary, as set by CH City Council in fall 2020, is $115,000, plus benefits. The mayor can veto legislation; council can override a veto with five or more votes.

A candidate must live in Cleveland Heights for at least 18 months prior to Election Day, be at least 18 years old, and be a registered voter.

The city council: The charter amendment did not change CH City Council’s makeup or function. It continues to comprise seven people, elected at-large, for four-year terms.

Beginning Jan. 1, 2021, the president of council can no longer also use the honorific title of “mayor,” as the previous charter had allowed. The council president will continue to be selected by his or her fellow council members.

There are four CH Council seats that will be up for election on Nov. 2. One, the seat formerly held by Melissa Yasinow, has been vacant since March 2, 2020; the other three are currently occupied by Davida Russell, Jason Stein, and Michael Ungar. If any of the three are considering a run for mayor, they can pull petitions for both city council and mayor on March 18, but must decide on or before June 16 for which race they will file a petition. A candidate can only run for one office at a time, because the filing deadlines for city council and mayor are the same.

[Editor's note: This article, and the February Opening the Observer column, have been corrected. Four, not three, CH Council seats will be on the Nov. 2 ballot.]

Tony Cuda is the former campaign manager for Citizens for an Elected Mayor, and is part of the CEM Transition Subcommittee.