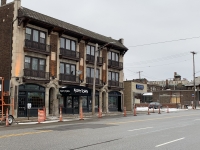 The iconic Nighttown restaurant remains closed in January 2020 as construction continues on the Top of the Hill. Photo by Deanna Bremer Fisher.

With the $80 million Ascent at the Top of the Hill project rising in the Cedar Fairmount Business District, the announcement that Brendan Ring has sold Nighttown signals that more change is on the way.

On Jan. 5, a syndicate of real estate investors, headed by Rico Pietra and Yaron Kandelker, purchased all of Ring’s holdings in Cedar Fairmount: the building that houses CL Barber Salon, the former Zoss building, the former Fifth Third Bank, and the iconic Nighttown restaurant, which Ring has owned since 2001. A regional destination and community gathering place, generations of Heights residents have celebrated significant life events at the restaurant, and cherished the cozy Irish pub’s eclectic atmosphere. Ring expanded the restaurant over the years to include 435 seats in several rooms, two three-season patios, and musical offerings that led DownBeat Magazine to name it “one of the top 100 jazz clubs in the world.”

Ring closed Nighttown in March 2020, out of concern for the safety of his patrons and employees, before the state mandated shutdown. He reopened on July 1, and then closed again on Nov. 22, when COVID cases began to rise. He said he had not planned to sell, but that the unsolicited offer and some health scares made him realize that the time was right.

“We are so happy for Brendan, and so sad for the rest of us,” said Myra Orenstein, executive director of the Cedar Fairmount Special Improvement District (CFSID).

Ring helped create the Cedar Fairmount Business Association in 2004, which later became CFSID. The state of Ohio enables the creation of nonprofit Special Improvement Districts (SIDs) to enable property owners in a geographic area to pay an additional tax that is designated for specific improvements, such as marketing, special events and beautification efforts. Ring served as CFSID’s founding president and then its treasurer until last month. Board meetings were often held at Nighttown.

“I hope the new owners will continue with the SID. It is the reason why Cedar Fairmount is so successful,” said Ring. “When we first started, the area had no cohesiveness. It was a bit worn down. We weren’t getting anything done.”

CFSID began holding an annual street festival. In 2009, CFSID created a streetscape improvement plan; it implemented the $4-million streetscape and Cedar Road resurfacing project in 2018. Ring and CFSID were tireless advocates for development at the Top of the Hill site.

“The SID unified the district, bringing the merchants, owners and neighbors together," said Ring. “The streetscape came together and is beautiful. Without the support of the SID, Top of the Hill wouldn’t have happened.”

Ring said the new owners are investing in the building’s façade, and will upgrade the 16 apartments above. They plan to reopen Nighttown this summer, and are negotiating with “an elite local celebrity chef.”

A new drive-thru Chipotle concept, where customers order with an app for fast pickup, is slated to open in the former Fifth Third Bank building in March.

“It’s an exciting time to be in Cedar Fairmount,” said Ring, adding that he hopes that the new owners will build on the legacy of Nighttown, add the new chef’s talent, and take it to the next level—and that they will be actively involved in the SID.

Ring’s future plans are uncertain. He and his wife will do some traveling, but he says he has no intention of abandoning Nighttown. “I’m looking forward to being on the other side of the bar,” he said.