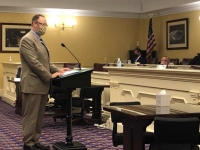 University Heights Mayor Michael Dylan Brennan said residents are the winners in the new contract agreed to by teachers in the Cleveland Heights-University Heights City School District. He said he hopes the agreement will lead to a renewed effort to fix Ohio’s system of funding schools.

At the school board meeting on Dec. 8, Brennan congratulated the teachers’ union and board of education on the new two-year contract. “Everyone at the bargaining table made their points and came away with wins, but the winners overall are the students and families of this district,” Brennan said. “In spite of everything stacked against this district, both sides were tenacious in asserting their valid and competing interests. Now, if we would, let us take that tenacity and join together and redirect it to Columbus.”

Brennan urged both sides to lobby state legislators on school funding. “Everyone needs to pivot and be as engaged in school funding issues as we were in ensuring fair compensation for our teachers and fiscal sustainability for the district as a whole,” Brennan said.

“The future of University Heights and Cleveland Heights, our fortunes, our success, are all tied at the hip, together with our shared school district,” he said. “May we all prosper together, and dedicate our efforts to ensure that happens. It does not happen without reform in Columbus on school funding.”

Noting that achieving school funding reform “may seem difficult, impossible even,” Brennan pointed out that, until recently, achieving a new contract without a long strike seemed impossible.

“Rather than feel spent by this last round with each other, let us all be energized by it, join forces in this common goal, and fight for fair school funding,” urged Brennan.

On Dec. 2, Brennan testified at the Statehouse in favor of House Bill 305, which would have made significant changes and improvements to Ohio’s school funding system. The legislation passed the Ohio House, but was not acted on by the Senate.

Brennan anticipates the legislation will be reintroduced early in 2021, and he is optimistic it could be part of the next state budget.

Brennan has discussed school funding reform with State Sen. Sandra Williams, as well as the Senate Finance Committee chair, State Sen. Matt Dolan. “After speaking with them both, I know they both understand how important reform is, especially to the CH-UH district,” Brennan said. “We’re going to need to keep up the pressure to make it happen.”

HB 305 addressed the funding disparity in Ohio’s school funding system, found to be unconstitutional by the Ohio Supreme Court in the 1996 DeRolph decision. The proposal determines a base cost of education unique to each district, together with a new formula for local share. HB 305 resolves the over-reliance on property valuation by implementing a blend of income wealth with property wealth.