New book looks back at CH's resistance to segregation 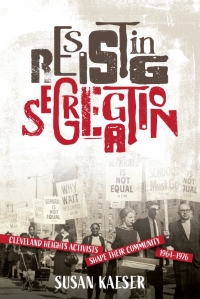 Susan Kaeser’s new book, Resisting Segregation, is out this month. In it, Kaeser, a Heights Observer columnist, provides a book-length account of the transformation of Cleveland Heights, between 1964 and 1976, from an exclusive, insular suburb to a racially inclusive, diverse community resisting segregation.

She dedicates her book to those courageous African American families who, in spite of prevailing racism, moved to Cleveland Heights in the 1960s and early ‘70s.

Resisting Segregation tells its story through the living memory of the community’s elders, whose courage and determination made housing choice for all a reality at a time when the government enabled redlining, blockbusting, steering, and unabashed racism, assuring that residential integration could not succeed. This resistance against segregation was the work of grassroots citizens motivated by religious faith, civic humanity and moral fervor.

Kaeser is unabashed in her love for the community. She and her husband moved here in 1982. Hers is a study by an admiring insider.

The rich detail in this book—of people, organizations, events and institutions—assures that local readers will recognize neighbors, friends, leaders, happenings and references. There are lists, timelines and pictures. The book is divided into two parts: the first describes how courageous Black families began settling in the Heights; the second shows how fragile integration was defended, when federal and state civil rights laws did not do so. Chapters take different perspectives on the process, moving from groups to organizations and institutions, until the city government, in 1976, adopted a nine-point program of policies to strengthen the community’s resilience against forced segregation.

Two side notes regarding Cleveland Heights government: Barbara Roderick, the initial convener of Heights Citizens for Human Rights in 1964, was later hired by the city as its first community relations official. She went on to help form other community organizations resisting segregation. Susanna Niermann O’Neil, the current acting (and probably the last) city manager, was a Coventry Neighbors volunteer checker for a housing  discrimination case that went to federal court in 1972. She joined the Housing Service, operated by Heights Community Congress, and headed that program when it was transferred to the city in 1976. These are examples of institutional change at CH City Hall, from the bottom up.

It would be a mistake to read Kaeser’s book as nostalgia. She writes: “As we know all too well, racism has not been extinguished and integration is always tenuous. It can’t be taken for granted.”

Her book comes out at a moment when a renewal of resistance against racist segregation is emerging. This book can serve as inspiration to a new generation of leaders through its account of how to bring down segregation—not just residential, but also in the private and public institutions and structures that unjustly and inequitably prevent sustainable integration.

In Cleveland Heights, Resisting Segregation ($19.95) can be purchased at Appletree Books and Mac's Backs-Books on Coventry.

Kermit Lind has been a Cleveland Heights resident since 1971. He taught history, and was a professor of law, at Cleveland State University. He joined the staff of Heights Community Congress in 1974, and later served as its executive director. He has remained slightly active in Cleveland Heights civic affairs and Forest Hill Church (Presbyterian) in retirement.