Old Edwards Street fades away as Top of the Hill rises 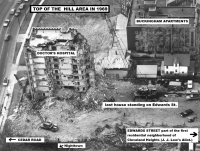 This Cleveland Press photo taken in 1969 by Bill Nehez shows what was formerly located on the site of the new Top of the Hill project.

At the top of Cedar Glen, in the wedge between Cedar Road and Euclid Heights Boulevard, “The Ascent at Top of the Hill” (TOH), an $80-plus-million complex, is taking shape. This same location, shown in the adjacent 1969 photo, shows Edwards Street, a remnant of the first residential neighborhood in Cleveland Heights.

Edwards Street was created in 1871 at a time when the only access up Cedar Glen was a muddy, horse and buggy trail zigzagging along a rocky creek called Blue Rock Brook (a branch of Doan Brook). The TOH site was once a place where gypsies made their yearly camps and wild turkeys roamed in abundance. By the end of the Civil War, the huge forests that had covered the area had been “harvested.” Broad meadows and farmland remained, stretching out eastward toward Lee Road.

This area was still under the jurisdiction of East Cleveland Township, as the city of Cleveland Heights did not come into being until the early 1900s. The small patchwork of farms along Cedar Road belonged mostly to the “Doan’s Corners” families, whose residences were situated just west of University Circle along Euclid Avenue, and its side streets.

Edwards Street was first laid out 150 years ago, as John J. Low and fellow developers Thomas Stackpole and James Parker worked together to create two connecting Heights allotments of Cedar, Edwards, Cliff, Parker and Franklin streets. It was a steep climb up from the city, but this “overlook” afforded a distant view of Lake Erie, and was only a walk up from Doan’s Corners. An added amenity was the natural “healing” mineral springs at the foot of Cedar Hill (where later, the old Lincoln Storage building stood).

The new neighborhood was soon dotted with the homes of city folks yearning for a cleaner “country” life. It also attracted the attention of the Seeley family of the Cleveland Water Cure fame, who purchased many house lots there (for what specific reason we may never know).

Edwards Street was likely named for Reverend Joseph Silliman Edwards (1818–1876) of Doan’s Corners, a real estate partner of Low’s. If not for the reverend’s untimely death, it is likely that the “dead end” streets of the earliest Heights allotments would have been extended through his adjacent property on Cedar.

This early neighborhood lasted only about two decades before a visiting real estate developer, Patrick Calhoun (grandson of U.S. Vice President John C. Calhoun, 1828–1832), set his eyes on it. On his way to see the Garfield Monument in Lake View Cemetery, he fell in love with this “entrance to the Heights.”

Calhoun purchased connecting parcels, including most of the “J. J. Low” and “Stackpole and Parker” allotments, and fashioned his new upscale, curvy, “Euclid Heights Allotment” right over the top of it. Previous houses were torn down, and Blue Rock Creek was buried underground. Several Edwards residents refused to budge though, so the out-of-place Edwards Street stayed, even though several subsequent maps refused to include it at all.

In 1913 two apartment buildings arose: a four-story and an eight-story, fronting Cedar Road, dubbed “The Overlook Apartments.” By 1946 these apartments were converted into the Doctors Hospital complex (a forerunner of Hillcrest Hospital). The two buildings were connected to a parking garage on Edwards Street by way of underground tunnels. The Buckingham Manor (apartments, now condos) was constructed just before 1926. It has a Euclid Heights Boulevard address, even though its entrance and courtyard leads out onto Edwards. The stately Buckingham itself is a survivor, a holdout from a past golden architectural era, holding its own ground as the modern TOH project crowds in around it on three sides.

The last house on Edwards was the long-held property of the Ban/Direnfeld family. In 1967, ages after the last Euclid Heights streetcar had rumbled past it, an evil lowlife, motivated by racial hatred, bombed the house. The target was not the Direnfelds, but a civil rights worker living in a dwelling in the back of the property. In 1990, the Direnfelds sold their house to the city of Cleveland Heights, which levelled the structure to expand an already large parking lot.

This last house standing was also the last house to ever have an Edwards address. As the TOH project rises, Edwards has mostly disappeared, only a short “nub” remains. The street sign still stands—at least for now.

Korbi Roberts is a trustee of the Cleveland Heights Historical Society. Visit www.clevelandheightshistory.org to learn more and become a member.