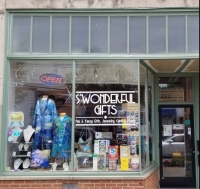 I worry about how the small retail businesses in our community are doing, and whether they will be able to survive this winter. Grocery stores seem to be leading the way in adapting to the pandemic environment; my wife just came back from Zagara’s Marketplace, where she was able to pick up six bags of pre-ordered groceries without entering the store.

My reluctance to go inside any building, with the second wave of the contagion raging in Cuyahoga County, has kept me from visiting S’Wonderful Gifts, a delightful little shop at 2254 Lee Road. I’ve purchased gifts there before, as have my wife and daughter. Curious about how the store is doing, I called the owner Bill Wort and had an enlightening conversation with him.

Wort runs a one-man operation from his storefront, where he markets a colorful and hip line of gifts, games and cards you won’t find at Target. His website, www.extravaginza.com, lists about 75 percent of the items he carries in the store. You can order online and have it shipped to you, or you can pick it up at the store. He’ll bag it up and bring it outside, though he says it “feels a little like a hostage exchange” as he sets an order down on the sidewalk and backs up into the store so a customer can pick up the goods. “Maybe I need a hollow tree where I can set this stuff,” Wort mused.

When the pandemic came, in March, Wort shut down the store for in-store purchasing for two-and-a-half months, and his sales dropped to 30 percent. He re-opened the store in June and July, requiring masks and limiting clientele to five at a time; his sales went back up to about 50 percent. In August, his sales went up to 75 percent of previous levels, and in September he actually did better than in September 2019.  But October has seen a drop back to the 75-percent level, possibly due to the second wave of the pandemic we are experiencing.

Like everyone in retail, Wort is hoping for a surge of holiday buying this fall. I’m hoping right along with him. He characterizes his current sales as “spotty,” and hopes [as of this writing] Halloween, Thanksgiving and Christmas will bring more people through his door or to his website. It’s the holiday traffic that keeps him going during the lean months of January, February and March. S’Wonderful Gifts offers a unique and artfully diverse line of products we will never find at the big box stores, and it deserves our support and patronage.

Greg Willihnganz and his family moved to Cleveland Heights in 2017. Since then, they have been restoring and refurbishing their 100-year-old duplex on Derbyshire Road.