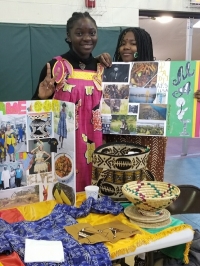 Nadia Zampiere, an American Foreign Service (AFS) student at Heights High, knew the virus was coming. Her family in the northern Italian city of Tribano was hosting an exchange student from Greenland while Nadia was spending her year in Cleveland. When the international community decided that the students in Italy should return to their home countries, Zampiere was worried.

“I wasn’t sure what would happen to us,” she said of the AFS students at Heights High. “I was sure that the virus would come to America, too. But I still had hope.”

That hope was dashed when schools throughout Ohio closed in mid-March, flipping the worlds of students upside down in an instant. For the AFS students at Heights High, the global chaos and uncertainty was felt deeply and personally.

Intense coordination began among AFS, the U.S. State Department, representatives from the students’ home countries, and hundreds of facilitators in American school districts as they worked to safely return students to their families.

For Zampiere, Maria LaBanca of Italy, and Nicholas Aguilar Muñoz of Spain, the move came quickly. Within a week of school closure, they were told to pack their bags and be at the airport in 48 hours.

“I was really, really sad to not say goodbye to all my friends and teachers,” Zampiere said from her home in Padua. “I thought about all the things I hadn’t done: the spring vocal music concert, tour with the VMD, prom, graduation, once-in-a-lifetime opportunities. It wasn’t supposed to go this way.”

Instead of heading off on tour with the Vocal Music Department (VMD), which had welcomed her like family, Zampiere spent a chaotic 14 hours in the Chicago airport with 300 AFS students from across the country, all heading back to their homes in Spain and Italy.

When they landed in Rome, a policemen yelled at them for standing too close to one another. “I could feel the difference immediately,” said Zampiere, “between how we acted in the U.S. and how we had to act in Italy,” which, at that time, was the epicenter of the global pandemic.

After two weeks of strict quarantine in her bedroom, she was able to spend time with her family, though restrictions confining people in their homes had yet to be lifted.

Leaving at the end of an exchange year has always been full of mixed emotions. Students are sad to leave host families, friends, and schools in the United States, but happy to return home with newfound perspective and confidence. For exchange students returning home early during the pandemic, the transition was especially challenging.

As of early May, five other exchange students—from Cameroon, Mali, the Philippines and Tanzania/Zanzibar—hadn’t yet faced that transition. (The Brazilian student, here for a one-semester exchange, returned home in January, as planned.)

“I’ve watched a crazy number of movies,” said Joyce Tagne, who was in isolation with her host family, Sandra, Michael and Alexis Dixon.

“At the beginning, I was excited for a three-week vacation,” said Tagne, echoing the thoughts of many teens. “But then everything changed.” She spent a lot of time on SnapChat with her fellow AFS students, and continued her schooling online. She also taught her host family to cook traditional Cameroonian dishes. “It was really tough,” she said of the uncertainty.

Tagne was also part of the VMD at Heights; it was the highlight of her year. “Every day I would see my friends from Singers,” she said. “We were like one big family.”

Tagne returned to Cameroon on May 10.

Krissy Dietrich Gallagher is a longtime resident of Cleveland Heights, a graduate of the Heights schools and a former Coventry School teacher. She is a freelance journalist under contract with the CH-UH City School District.