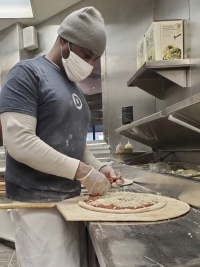 Kitchen Manager Jon Averyheart creates a pizza at Dewey's. All employees wear masks, and have their temperatures taken when they arrive at work.

“Dewey’s Pizza, please hold. There are two people ahead of you and we’ll get to you as quickly as we can,” said the polite, but a little stressed, voice on the other end of the phone. (Never have I been more pleased to be put on hold while working a story.) Results weren’t much different at another Lee Road purveyor, Mitchell’s Fine Chocolates. “No one will be able to talk to you until after Easter. We’re too busy,” an employee told me.

In-person visits brought similar results, with waiting in line a requirement for getting a coffee at Phoenix and a whole wheat Pugliese loaf at Stone Oven. Many Lee Road food and beverage businesses are providing service through the pandemic, and grateful customers are responding with purchases, and kindness.

Kelli Kral, an owner of New Heights Grill (2206 Lee Road), said she got an anonymous $500 check in the mail which, she later figured out, came from a man who is a longtime customer. “One lady called last week, and she wanted to set up a Go Fund Me page to help employees out with their rent,” said Kral. She told the woman it wasn’t necessary. Others call with good wishes, and to check up on Kral and the bar. “Our customers have been very supportive,” she said. “We love them all.”

Kral said she’s gone from 16 full- and part-time employees down to four or five. “The kitchen guys left on their own,” out of fear of the virus, she said, and employees who had other full-time jobs they could do from home also opted out. Kral applied for one of the new small-business grants from the federal government, but doesn’t want to take a loan yet.

Takeout has gone from comprising 25–35% of New Heights Grill’s business, pre-virus, to 100%. Krall is offering $1 bottles of domestic beer, and $2 to $3 for craft and import brands. The bar’s comfort food—the chicken avocado club sandwich, pork mac ‘n’ cheese, and fish fry—continue to be best-sellers.

“There’s a sense of community in the neighborhood that keeps us going,” said David Igel, one of the owners of Dewey’s Pizza (2194 Lee Road). “We’re so thankful for everybody being understanding, generous and patient.” Igel said he’s seen the “emotional connection” customers have with their food, and many have expressed gratitude that Dewey’s remains open.

Igel said he’s witnessed touching acts of generosity from customers. One woman bought eight pizzas that she was delivering to relatives who were too frightened to leave their homes. Others have bought pizzas to deliver to healthcare workers in local hospitals.

Prior to the crisis, Igel said takeout was about half of Dewey’s business. Now all customer service is curbside. Employees get their temperatures checked when they arrive for work, and answer questions about how they’re feeling. All wear masks and gloves. Igel said the pizza chain has re-doubled its commitment to cleanliness, assigning one employee on every shift to continuously clean work areas. He said he’s been inspired by “the bravery they’ve shown.”

Tatyana Rehn and John Emerman are celebrating 25 years as owners of Stone Oven Bakery & Cafe (2267 Lee Road) in the middle of the pandemic. Emerman said that when the governor’s close order came down March 16, the first issue was employees who decided to stay home because they were concerned about the virus—a decision the owners say they respected. “Fortunately, the business was diminishing at the same rate, so they all came down together,” said Emerman. Stone Oven went from 20 employees to seven or eight.

The next challenge was getting online ordering up and running. Emerman said they had resisted the change for two years because they weren’t sure of the impact on the business, “and because I’m lazy,” joked Emerman. “Please put that in there.”

Now that online ordering is going, “We are loving it,” said Emerman. But Rehn noted that 80% of business is still walk-in: “People insist on coming here and picking and choosing from the display.”

The situation has changed not just how, but what, people are buying. “People who aren’t going out to restaurants are now looking for more meals for their homes,” said Emerman. “So we’re selling more bread, more bulk quantities of soup, chicken salad, tuna salad, all those sorts of things, as well as desserts.”

For safety, Rehn and Emerman have increased sanitizing, and put Plexiglas up along the food counter. Getting masks for all employees was an issue, but an order was on its way. They said business is down by about half, but tips are way up from customers grateful for the servers who are taking health risks to provide good food and a sense of normalcy.

Rehn and Emerman said they appreciated the city providing free parking at meters. Rehn said she applied for a payroll protection loan from the federal government, but has not heard back. “I don’t think we could sustain ourselves like this forever, but we’ll certainly get by,” said Emerman.

“I do miss walking by, seeing people, hearing people. We can’t wait to resume business with them. We miss them all,” said Rehn. “We thank those that are still supporting us.”

Phoenix Coffee Co. has been in Cleveland Heights for about 20 years. Christopher Feran, director of coffee, compared the crisis to “standing in the middle of a frozen lake, and you start to see cracks.” He said you can either start running for shore, or hope for a helicopter rescue.

Phoenix is running hard. Feran said the company has gotten its “head above water.” It’s cut its workforce by two-thirds, mostly employees who chose not to work or volunteered to stay home. “We’re proud of them,” he said. Top managers have cut their salaries by more than half, and store managers have gone from salaried to hourly. Phoenix closed its downtown cafe (in a now empty office building), and kept neighborhood locations, including its two in Cleveland Heights (1793 Coventry Road and 2287 Lee Road), open.

The CH locations are getting take-out customers, but business is still down 60–65%. On the positive side, Feran said Phoenix had more online sales in March than in all of 2019, and tips have doubled. The company immediately applied for a federal payroll protection loan, and hasn’t heard back. Like Stone Oven, Feran said the city’s free-parking policy has helped.

The crisis has led to an innovation for Phoenix: bike deliveries. A barista at the Lee Road cafe, Stephen Shaum, had been planning to start his own bike delivery business. Instead, he’s riding for Phoenix, delivering coffee and pastries for a flat $5 fee. Feran said Shaum has made about 120 deliveries in the last three weeks, and is “the healthiest person in the city right now.”

The community has “come out in a big way,” said Feran. “Cleveland Heights has shown so much loyalty to small business. We could not be more grateful.”

Fred D'Ambrosi has been an award-winning journalist for 40 years, mostly as a TV news director in Cleveland, D.C., San Diego and Milwaukee. He's enjoyed living in Cleveland Heights since 2015.