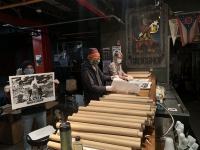 “This is a weird time to be alive, right?” he asks.

When one first steps into the Grog Shop on Coventry Road, that’s the greeting from the large wall mural of a young man and young woman, staring into each other’s eyes, as the world around them burns.

Artist Jake Kelly created the iconic piece for Grog Shop owner Kathy Blackman when she moved the historic music venue up the street to its current location in 2003.

“The apocalypse and ruin have always been part of my work,” said Kelly.

Blackman remembers many late nights as Kelly worked to finish the mural. He slept there more than once during the month or so it took to complete it.

Recently, as the wide-reaching impacts of COVID-19 spread, people on social media began to share photos taken in front of the mural over the years—its themes obviously resonating in these uncertain times. Blackman said that it prompted her to “casually post that Jake is a prophet.”

“The Friday that the Grog closed down fully, I was trying to think of something to do to help the 19 people that work there,” said Kelly. “I have been asked many, many times over the years if I could make a print of the mural, and now seemed like the time. Kathy liked the idea, so I took a few days to draw it and we got the ball rolling.”

As of mid-April, 600 signed posters had been sold, at $30 each. All proceeds are split between Kelly and the unemployed Grog Shop and B-Side Lounge employees. The posters can be ordered at www.grogshop.gs.

Stepping into the Grog Shop today, one is greeted by Kelly and Blackman working together in protective masks, rolling up the signed prints and prepping them for delivery. It’s been tough to keep up with demand.

“Everyone has been very understanding,” said Blackman, “and I am really stunned and appreciative of the amazing support and generosity of the music community near and far. There have been as many out-of-state orders as from the neighborhood, which is humbling.”

In the mural, as everything descends into chaos, the band plays on. As much as the world might need music right now, that is not the reality for Blackman.

While many local restaurants are able to scrape by with to-go service, there is no take-out equivalent for local music. “I am honestly not sure what the reality of the post-virus restrictions will mean for the live-music scene,” Blackman said. “I have thought about it a lot and believe we will be slow in bouncing back for many reasons.

“Almost all of my shows through June have postponed until fall, or even 2021. I do have stuff booked in July and August still, but touring bands seem to be looking further out now as backup, just in case. Even when restrictions are lifted, I am concerned that people will be hesitant to gather in large groups, which I need for either of the clubs to really be successful long term. I am trying to stay positive and ride this out.”

Kelly has created hundreds of concert posters and murals over the last few decades. When he looks at the Grog Shop mural now, he thinks, “As comfy as we might feel now, history is nothing but rocky roads and horror. The best thing we can do is love each other and prepare for the worst. And this is nowhere near as bad as it can get, so we should all count our blessings and thank whatever gods we believe in.”

Adam Dew is a proud member of Heights High's Class of '94. He owns Dew Media, Inc., a video production company.