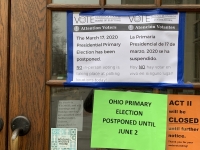 [UPDATE: Election Day is not June 2; instead, it was moved to April 28, and made a by-mail-only election.]

The Cuyahoga County Board of Elections (BOE) has posted a link to Dr. Acton's order, which provided a timeline of federal and state news on the spread of COVID-19. In it, she cited the CDC's March 15 statement warning against mass gatherings of 50 people or more, in ordering that polling locations in Ohio close on March 17.

The BOE's website also provides a link to Directive 2020-06, issued by Ohio Secretary of State Frank LaRose, summarizing the decision to close polling locations, setting forth directives for the state's BOEs in notifying voters, and processing absentee ballot applications. It also outlines specific provisions for voters with unforeseen hospitalizations.

The county BOE has not, as of this writing, updated its voter deadlines for the mailing of, and deadlines for, absentee ballots.