Heights students delve into history of slavery and the Holocaust 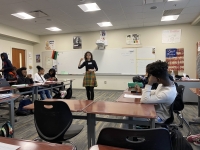 Students at Heights High can take a wide range of elective classes. They can focus on their passions, such as music or art; or on their future careers, such as engineering or Web design. Or, they can expand their worldview by taking African American history or a course on the Holocaust. Mark Sack, who teaches the Holocaust course, wanted to share what his students learn with the rest of the school. He recently had an opportunity to do so, thanks to a grant from the @akiva program of the Jewish Education Center of Cleveland.

Stein introduced students to firsthand accounts of both the Holocaust and slavery, opening the door to numerous questions, comments, and observations. Many of the teens were excited to read diary entries from people other than Anne Frank, in what Stein refers to as “history that has previously been hidden from us.”

Xavier, an upperclassman, said he was impressed with how Jewish people took the Star of David, a symbol that was intended to shame them, and turned it into a symbol of pride. The students discussed how other cultures have managed to take back terms or images designed to insult or belittle them, and claim them as their own.

Stein emphasized that the diaries students were reading were written in the moment, at a time when the extent of the horrors of the Holocaust were not yet fully known. This sense of suspense and growing dread struck a chord with another student, Michael, who said, “It felt like there was a bomb under the table waiting to go off, but only I knew it was there.”

Stein told Williams’ freshmen about Holocaust deniers, explaining that, as students, they needed to learn and share the truth. “I never say ‘Jews died’ in the Holocaust, because people die every day for all sorts of reasons. I only say ‘Jews were killed.’”

Feldman considered the experience invaluable for her students, especially because, this semester, her college composition curriculum revolves around issues of social justice. “This really got the ball rolling and gave them something to think about,” she said.

Krissy Dietrich Gallagher is a longtime resident of Cleveland Heights and a freelance journalist under contract with the CH-UH City School District.