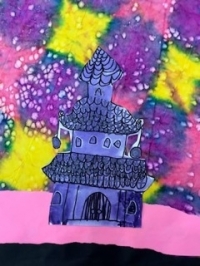 Empress of the Pagodas.  Photo by Holly Spooner

Students at Canterbury Elementary School know a thing or two about synesthesia or, more specifically, chromaesthesia—seeing colors or shapes while listening to music. The school practices Mindful Music every morning, when students are encouraged to close their eyes, let their minds wander, and “picture” the music.

They recently had an opportunity to put this skill, and their knowledge of classical music and mixed media art forms, to good use under the guidance of Holly Spooner, art teacher at Canterbury. Students in grades two through five created visual images to accompany the Cleveland Suburban Symphony Orchestra’s Concert for Families at the Maltz Performing Arts Center on Dec. 8.

The orchestra played Maurice Ravel’s “Mother Goose Suite,” which features five classic fairy tales. Each grade first listened to a story in art class. They closed their eyes, imagined the scenes, and then brainstormed ideas for illustrations to go with the music, narrowing them down to one idea per story.

Second-graders chose a watercolor and collage garden scene for “Tom Thumb,” while third-graders drew pagodas and used a tie-dying technique for their background illustrations for “Laideronnette: Empress of the Pagodas.” The Fourth-grade classes chose an elaborate wintery scene featuring a castle for “Pavane of Sleeping Beauty,” while the Fifth-graders made a mixed-media collage of the famed stained glass rose for “Conversation of Beauty and the Beast.”

Spooner photographed every piece of art, and the orchestra projected each image on a screen behind the musicians either during the performance or at intermission. The audience of 450 was impressed, and many sought out the students to congratulate them. The musicians said they were inspired by the beautiful artwork.

Spooner has an audio recording of the concert to show to all the students, along with the slide show of the images, as not all were able to attend the concert. “They were very proud,” she said of those who attended. “I don't think they realized how special it would be.”

Krissy Dietrich Gallagher is a longtime resident of Cleveland Heights. She is a freelance journalist under contract with the CH-UH City School District.