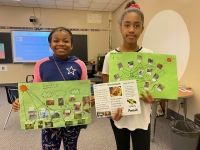 Students at Gearity Professional Development School in University Heights have the opportunity to become actual ecologists, meteorologists, paleontologists and engineers twice each week, when they visit the school’s science lab. On Nov. 21, they embodied those professional roles in their capstone presentations. This thrice-yearly event enables students to show what they learned in science and English language arts during each trimester.

As parents and community members visited the classrooms, students in kindergarten through fifth grade presented their projects highlighting what they had learned in specific topic areas.

Kindergartners focused on their observations on weather. They had made their own rain gauges and windsocks, and then hypothesized about the best locations for these weather tools. They then conducted outdoor investigations to prove or disprove their predictions, and eventually took them home to place in their own yards.

First graders studied the sun as the main source of the earth’s energy by placing colored paper outside to witness how the sunlight changed papers' shade over time.

Second graders pretended to be paleontologists conducting dinosaur research. They also created lap books to show how worms affect the soil in the school’s garden and hoop house.

Third graders studied the life cycle of butterflies, creating digital journals of images and explanations of their life stages, from egg to larva to pupa to butterfly.

Fourth graders also studied dinosaurs, with a greater focus on fossils. Each student in Aime Banas' class had a block of dirt that contained an actual dinosaur fossil to excavate, record and research, to determine what part of a dinosaur it was, the type of dinosaur, and where it might have lived. They added some history by reading about Mary Anning, the first female paleontologist.

Fifth graders examined how energy flows in an ecosystem.

After investigating local food webs, each student selected one ecosystem, such as rain forest, desert, or tundra. They created their own visual representations of symbiotic relationships, noting what happens when an invasive species or disease disrupts a typical food web. Using social studies and language arts, students created trifold brochures with details about religion, holidays, natural resources, and foods from various countries throughout the world.

Every classroom at Gearity participated, according to Sean Sullivan, science and engineering teacher, who helped oversee the projects with Jackie Taylor, STEM coordinator. “[The kids] were really excited to show what they learned and to learn from each other,” said Sullivan. “And it was nice for parents to see what a STEM school is really about.”

Krissy Dietrich Gallagher, a longtime resident of Cleveland Heights, is a former district teacher, and a freelance journalist under contract with the CH-UH City School District.