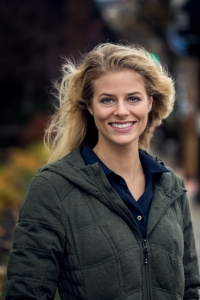 Cleveland Indians in-stadium host and John Carroll University (JCU) graduate Gabriella Kreuz will return to University Heights to host the city’s Civic Awards on Nov. 13. The awards dinner will honor several individuals whose efforts are making the city an even better place in which to live, work and raise a family.

Named one of 2019’s “Most Interesting People” by Cleveland Magazine, Kreuz was an All-American cross-country runner at JCU. She is an on-air personality for Fox Sports Ohio and WOIO Channel 19.

The event will take place on Wednesday, Nov. 13, 6:30 p.m., at the Lombardo Student Center’s Jardine Room on the campus of JCU. Tickets are $25 and are on sale now at www.universityheights.com. Prior to the awards ceremony, the Mal Barron Quartet will perform live jazz.

The late Josephine Morhard will be honored for creating the world’s first-ever baseball league for boys, right here in University Heights. Accepting the honor will be her son Al Morhard, and daughter-in-law Ruth Hanford Morhard, who is the author of anew book about the creation of this league, Mrs. Morhard and the Boys.

Two UH businesses will be recognized for their anniversaries: Flowerville is celebrating 70 years in business, while Heinen’s has been operating in University Heights for 60 years.

Student-athletes will also be honored, as JCU Athletics is celebrating 100 years of intercollegiate competition.

Fire Lt. Andrew Boylan will be recognized as University Heights Employee of the Year, while phone operator Rob Marcinick will be named Co-Worker of the Year.

In addition to returning to her alma mater to host the Civic Awards, Kreuz will be honored for her work with her nonprofit, Love Doesn’t Shove. The organization is dedicated to educating the community about the dynamics of healthy relationships as a means to end teen-dating violence, and to promote a safer and happier society.