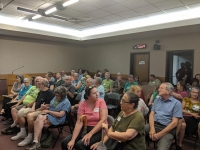 The fight over competing ballot issues to decide whether to keep or change the structure of Cleveland Heights City government was growing increasingly contentious. But CH City Council took a step back from the brink on July 29, when it voted to place only one issue on the ballot in November.

The city’s voters will be asked, yes or no, do you want the city to switch to a form of government led by a popularly elected mayor. That means a second issue, containing a passel of other proposed changes to the city charter, will not come before voters this year.

City council’s action was a victory for Citizens for an Elected Mayor (CEM), the grassroots campaign that had gathered signatures from 4,000 registered voters to place a referendum on the ballot.

It was a setback for another group, Cleveland Heights Citizens for Good Government (CHCGG) PAC, which sought to place that second issue on the ballot. That ballot issue would have been based on recommendations of the council-appointed Charter Review Commission (CRC), which worked for more than a year and opposed changing to a strong-mayor form of government.

The funding of CHCGG was a source of the growing anger between sides. According to media reports, its initial support included donations, some as large as $2,500, from five CH City Council members—the same people who had determined the makeup of the CRC and who would be responsible for placing its recommendations on the ballot.

Last week, a copy of an e-mail message from early June was circulated on social media. In it, the Washington D.C.-based International City/County Management Association (formerly the International City Managers Association) promised a matching donation of up to $25,000 to the CHCGG PAC from its Fund for the Future of Professional Management, to fight “to retain council-manager government in Cleveland Heights.”

All of that was brought to the floor on Monday during an hour-long session of public comment. Speakers supporting the grassroots campaign at times accused council members of using national-style money and politics to reduce voters’ influence over their own government.

Those supporting the current form of government at times accused CEM of being secretive, partisan and overly aggressive in pursuing a ballot that would contain only its proposal.

According to the city charter, it takes five votes of the seven-person council to place an issue on the ballot. The official vote to table the council proposal was unanimous, but that was only after it became apparent five votes couldn’t be mustered to support the second ballot initiative.

Council members Jason Stein and Kahlil Seren favored placing only the grassroots measure on the ballot.

Council members Melissa Yasinow, Michael Ungar, Carole Roe and Mary Dunbar all favored placing both issues on the ballot and letting voters sort it out. They also were listed as contributors to the CHCGG PAC, and each spoke on record opposing a change in the form of government.

In the end, the issue was decided by council’s newest member, Craig Cobb, who had served on the CRC, had contributed to the CHCGG PAC, and was appointed by council last April to fill the seat vacated after Cheryl Stephens was elected to the Cuyahoga County Council.

In an artful speech to the packed council chambers, Cobb said he personally opposes changing the form of government, but he respects the right of voters and trusts them to make the right decision.

Cobb said that placing only one issue on the ballot will allow voters to have a clear and honest debate about the big question; the other charter amendments can be addressed later. He added that if council had voted to place a second issue on the ballot, the decision in November—regardless of the outcome—would never be viewed as legitimate.

Cleveland Heights resident Bob Rosenbaum is co-chair of the Heights Observer Advisory Committee, and is responsible for its advertising sales and market development. While undecided about the issue of city manager v. strong mayor, he has donated $75 to Citizens For an Elected Mayor.