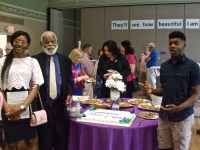 Two accomplished Cleveland Heights High School 2019 graduates are winners of the first Ron Register scholarships. Treasure Eiland was student vice president, and captain of the volleyball team. Trevion Johnson was a soccer all-star who has been working multiple part-time jobs to live on his own since junior year.

The $2,500 scholarships were awarded May 26 at Forest Hill Presbyterian Church, where the scholarship committee, members of the congregation, and donors celebrated the winners.

The scholarship is named in honor of Ron Register, who served on the Cleveland Heights-University Heights Board of Education for 16 years. When he retired in 2017, the Black Caucus of Forest Hill Church brought together diverse elements from the church and community to create the fund. Its purpose is to continue Register’s passion for quality education, and uplift academically deserving, but financially challenged, students.

At the ceremony, Register said he was deeply moved, and humbly thanked those responsible for creating a scholarship in his name. Noting the credentials of the inaugural recipients, Register said, "America's future is in fine hands and I am proud to have played a small part."

The committee said both students surpassed their selection standards: intelligence and academic achievement, an awareness of social/political issues, a commitment to working toward building a fairer and more equitable society and world, and financial need.

Eiland will be the first in her family to attend college. She graduated with a 3.8 GPA, was the 2018–19 student vice president, and served three years as captain of the school's volleyball team. She also volunteers at her church and other organizations. Eiland intends to major in biology/pre-med at Fisk University, a historically black college in Nashville, Tenn.

Johnson was raised by his grandparents. In his junior year he struck out on his own. This required him to work two or three part-time jobs. He excelled academically (3.1 GPA) and athletically. He was named to the second team All Greater Cleveland Soccer Team. Johnson will attend Loyola University in Chicago, where he intends to major in business.

The scholarship fund welcomes donations. The church maintains the fund and covers all administrative costs, so 100 percent of donations go to recipients. If you would like to support future graduates, make out a check to Forest Hill Church (3031 Monticello Blvd., Cleveland Heights, OH 44121), and in the memo line indicate that the donation is for the Ron Register Scholarship Fund. All donations are tax deductible.