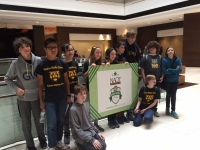 Could you name the biological domain composed of all cells that have membrane-bound organelles, in less than two seconds, without using Google? (Keep reading for the answer.) The Heights Middle School Academic Team can.

Over Mother’s Day weekend, they competed at the National Championship Tournament in Chicago, tying for 49th place among 176 teams from across the nation.

The Heights team, comprising seven students from Monticello and six from Roxboro middle schools, qualified for the tournament after strong showings locally, including two first-place finishes in 20-team competitions. Eleven of the 13 team members made the trip to the national tournament.

The tournament matches teams of four players who answer up to 24 “toss-up" questions on a variety of topics, including science, history, literature, current events and math.

The first team to buzz in with a correct answer is then offered three bonus questions about which players may confer. Rounds are 18 minutes, so the pace is rapid-fire.

“Playing 10 matches over two days was an intense experience,” said Laurel Buescher, a Monticello seventh-grader. “The questions were tough and definitely challenged us. Besides playing the games, I had a lot of fun being with my teammates in Chicago.”

Here’s another toss-up: Name the African terrorist group led by Abubakar Shekau, which kidnapped 276 girls from a school in Chibok in 2014. (Don’t know? Keep reading.)

"I'm so impressed with all the kids and their hard work,” said volunteer coach Kari Elsila. “Not many middle school students would voluntarily spend their weekends at practices and tournaments, but this team really embraced it. I was constantly blown away by how much they knew. Certainly, there were many, many questions that I didn't know the answer to that they did."

The team finished the Saturday competition with five wins and three losses. The winning record allowed them to advance to Sunday’s playoffs, where two tough losses ended their tournament.

This is the second year in row a Heights middle school team has made it to the national tournament.

This year, in addition to the strong team finish, Roxboro eighth-grader Kenji Sakaie’s individual score was ninth among 919 players in the tournament.

Were you smarter than a middle schooler?

Mike Bier is a graduate of Heights High and a member of the FutureHeights Board of Directors.