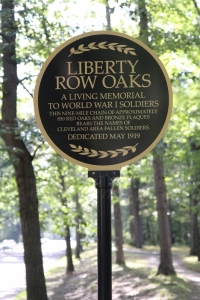 This Memorial Day, Monday, May 27, marks the 100th anniversary of the dedication of the Liberty Row Trees—a significant, yet little known, living memorial.

Planted along Rockefeller Parkway in Cleveland, and winding nine miles southeast through Shaker Lakes in Cleveland Heights and Shaker Heights, this stretch of red oak trees was dedicated in 1919 to honor World War I soldiers from the Cleveland area who lost their lives during the war.

Greater Cleveland was one of the first communities nationally to envision a multi-mile chain of trees as a memorial to fallen soldiers. This memorial followed the suggestion of American Forests Association Board Chairman Charles Lathrop Pack, who, in November 1918, called for “a new form of monument—a memorial that lives.” American Legion posts, garden clubs, students, and families who lost loved ones promoted this concept of planting trees as a memorial.

In Cleveland, coordinated efforts for the memorial began even before the Armistice that ended the war was signed in November 1918. The project established reforestation as a conservation measure in a city that had been clear-cut throughout the Industrial Revolution and was in search of its original identity as the “Forest City.”

The parks selected for the memorial were some of the city’s most beautiful, and deemed the perfect location. The memorial and the road were rededicated as Liberty Boulevard (now Martin Luther King Jr. Boulevard) on Memorial Day in 1919.

Between 1919 and 1924, more than 800 oak trees were planted—each with a bronze plaque at its base engraved with the name of a fallen soldier.

Over the past 100 years, many of the oaks have died and some of the plaques have been lost or damaged; however, there have been a number of restoration efforts in recent years. For several years, Holden Parks Trust has been replacing lost trees within Cleveland’s city limits.

In 2016, the city of Cleveland Heights installed three signs along North Park Boulevard to draw attention to this rich history.

Two Cleveland Heights residents, Al Oberst and Tom Gilbride, have looked out for and cared for the plaques over the years, and Oberst has installed flags near the remaining plaques on Memorial Day for several years. He’ll be placing flags near the plaques again this year.

The Cleveland Tree Plan, approved by the city of Cleveland in 2016, aims to make Cleveland the “Forest City” once again. One of the plan’s objectives is to develop a Landmark Tree Program. In order to accomplish this objective, the Sustainable Cleveland Forest City Working Group has initiated an inventory of the remaining Liberty Row Trees. Cathi Lehn, the Sustainable Cleveland manager in the Cleveland Mayor's Office of Sustainability, and Courtney Blashka, community forester with Holden Forests and Gardens, lead the working group. For more information, contact Lehn at clehn@city.cleveland.oh.us.

Jamie Miles is an intern for the Cleveland Heights Department of Planning & Development and a graduate student in historic preservation at Ursuline College.