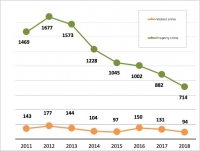 The 94 violent crimes reported in 2018 represented a 28-percent drop from the year before. Property crimes were down 19 percent, with 714 reported.

The biggest decrease in violent crime was in robberies. Rape and assault were down slightly, while there was one more murder in 2018 than in 2017.

Among property crimes, there were significant declines in burglaries and thefts, while the number of auto thefts and arsons rose slightly.

Police Chief Annette Mecklenburg credits much of the decline to good teamwork. “It takes the efforts of everyone, from beat officers to patrol officers to detectives to supervisors,” she said. “Most of our arrests are based on evidence collected at the scene by patrol officers, and investigative work performed by our detectives.”

She also noted that many suspects turn out to be involved in multiple crimes. As a result, each arrest has potential to prevent several future crimes—which is why the crime rate has continued to fall each year.

The charts present a year-to-year comparison of serious crimes reported in Cleveland Heights since 2011, which is when the CHPD began compiling data with a view toward using it to manage police operations. Since then, the CHPD has emphasized consistency with the FBI’s Uniform Crime Reporting guidelines—a regimented, clearly defined set of rules for classifying and reporting crime that has been updated continually since being introduced in 1930.

“Based on past crime stats we’re able to determine which areas are likely to have a greater likelihood of crime, and we will increase our visibility in those areas—which includes patrols and traffic enforcement,” Mecklenburg said. “I also believe that we should recognize the communications we have with residents. . . . Sometimes it is because of an alert citizen that we are able prevent a crime or apprehend an offender committing a crime.”

The FBI does not collect data on less serious Part II crimes—including trespassing, disorderly conduct, sexual imposition, public intoxication and drunk driving—because the rigorous classification process would be too costly for municipal police departments to apply to these lesser offenses.

For more information about how the CHPD collects and validates crime statistics, and why the Heights Observer publishes them, see the original article in this series at http://bit.ly/chcrimestats.