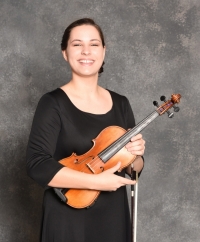 Graduating senior Maria Tarnay will perform with the Heights High Symphony, under the direction of Daniel Heim, in the CHHS Instrumental Music Department's (IMD) Season Finale Concert, on Friday, April 26, at 7:30 p.m. Tarnay will perform the first two movements of Samuel Barber's Concerto for Violin and Orchestra, opus 14 (Allegro and Andante).

Tarnay began studying music when she was 3 years old, her interest sparked by the talents of her older brothers, who played clarinet and trumpet. Tarnay began taking private violin lessons at an early age, studying with Hannah Fry for about a year before switching to Emily Cornelius, with whom she has studied ever since.

Tarnay has performed on the violin with the Heights High Symphony for four years, achieving Principal Second in her freshman year and serving as Concertmaster her junior and senior years. She has also played in the chamber ensemble program for three years, frequently performing around the community in various events. Along with school ensembles, Tarnay has been a member of the Contemporary Youth Orchestra for two years, achieving Assistant Principal Second Violin and Assistant Concertmaster in her second year. She has served as Vice President of Service for Tri-M this past year, and was a counselor at the Reaching Heights Music Camp for three summers.

Outside of the music department, Tarnay has also been on the swim team for four years, serving as a captain her junior and senior years.

Tarnay also enjoys reading, working as a lifeguard at the community pool, and spending time with her friends. Next fall, she plans to pursue studies in biomedical engineering.

A reception will follow the concert on Friday with entertainment by the Jazz Ensembles.

Additionally, the Heights IMD Jazz Ensembles, under the direction of Brett Baker and Ben Ammon, will perform a program of upbeat music at their annual Jazz Night concert on Friday, May 3, at 7 p.m., in the Heights High Auditorium.