Heights middle school students shine at Power of the Pen 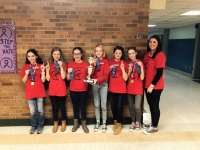 Members of the winning seventh-grade team from Roxboro Middle School with their coach, Caitlin Gerber.

Monticello and Roxboro middle school students wield a mighty power—the power of the pen. Last December, teams from both schools participated in the eighth Power of the Pen writing competition, hosted by Monticello at the Wiley campus.

More than 200 middle school students from 22 area schools attended the full-day Saturday event. After a get-to-know-you scavenger hunt, students participated in three rounds of intense competition. Groups of six students gathered in classrooms where they had 40 minutes to respond to an assigned writing prompt, for example, “describe a fate worse than death in your narrative,” or “liven things up in an otherwise dull study hall.”

The stories generated in each session were judged on a series of criteria, including creativity, voice, grammar and spelling, and adherence to the assigned topic. Points were awarded to each student before they moved to the next room to compete against five different writers, using a new prompt. When the total points were tallied at day’s end, Heights’s middle school students did extremely well.

Those students, who practice once a week after school, will move on to the regional tournament in April. Top scorers in that event will then advance to the state tournament at the College of Wooster in May.

Joellen Denk, Roxboro librarian and Power of the Pen coach, said, “This absolutely makes them better writers. Getting weekly feedback from their peers and a teacher is incredible.”

Debbie Frost, district coordinator of Power of the Pen and intervention specialist at Monticello, added, “This is a great opportunity for CH-UH to showcase our most talented and creative writers.”

Krissy Dietrich Gallagher is a longtime resident of Cleveland Heights, and former teacher. She is a freelance journalist under contract with the CH-UH City School District.