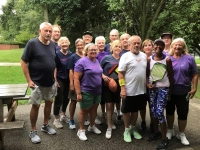 Cleveland Heights Community Center visitors may see a group playing a game with paddles on courts there. They are playing pickleball—a combination of tennis, badminton and table tennis. It's played with a paddle and a hard plastic ball with holes, on a court about half the size of a tennis court. It's usually played as doubles, and players rotate. Pickleball is quickly learned, and information is available through USA Pickleball (www.usapa.org).

In Cleveland Heights, from October through May, it's played Tuesday and Thursday mornings indoors at the community center. In the summer months, it’s played outdoors on four courts at Denison Park.

About 20–25 people play regularly in Cleveland Heights. Most have taken up pickleball within the past three years, learning about it from a variety of sources. Player Judy Hauser said, "I cannot envision my life without pickleball. It has given me a new skill, new friends and much joy—I wish I had discovered it earlier."

In addition to the exercise, CH’s pickleball players enjoy meeting people and making friends. A majority of them are CH residents. Others live in nearby suburbs. With an exception, they range in age from 62 to 80. The majority are retired. A slight majority are females. Their professional backgrounds include computer engineer, book buyer, restaurant manager, social worker, journalist, CPA and librarian, and they have worked at the Ohio Health Care Administration, Planned Parenthood, The Cleveland Clinic, the Veterans Administration, the Hospice of the Western Reserve, Heights High, Case Western Reserve University and Cleveland State University.

This diverse group volunteers at a variety of places, including Meals on Wheels, the Cleveland Food Bank, Toastmasters International, the Cosgrove Center, The Cleveland Clinic (therapy dog), Heights Libraries, the Chagrin Valley Horseman's Association and the Maltz Museum. One of the players, while on vacation in 2018 in Chennai, India, took donated pickleball equipment to introduce the game to residents there.

Cleveland Heights residents pay $3 per session, or $25 for 10 sessions, at the community center. Non-residents pay twice that.

Dennis Keating is a Cleveland Heights pickleball player and member of the FutureHeights Board of Directors.