Church of the Saviour is 90 years old 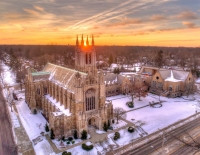 On Nov. 25, 1928, Church of the Saviour held its very first worship service. This year, on Nov. 18, the Cleveland Heights church will celebrate its 90th anniversary with a worship service held in the building’s original sanctuary, essentially unchanged since its inception.

The Lee Road building, designated a Cleveland Heights Landmark in 1975, is now home to more than 1,400 congregants from the Heights and surrounding communities. Reverend Andy Call, lead pastor, describes the congregation as “diverse in every way—racially, generationally, economically, politically, and theologically—but united in the mission of bringing new life to Greater Heights by living and sharing the Gospel.”

Call’s description is reflected in the church’s five-year plan, which includes an invitation to “see the world as God sees the world,” according to Renee Leonard, who serves as the church’s lay leader with her husband Jim. This leads directly to Church of the Saviour’s active engagement in its community and in the world.

“We have a long history of being out in the community, tutoring in our schools, serving at the City Mission,” said Leonard. She outlined ambitious plans for the anniversary year, including “getting as many people as possible out there working.”

The church has fostered a special relationship with the city of East Cleveland, which both Call and Leonard say will be a major focus of their service work in the coming year. “We don't want to march in there and tell them what to do or save them from their problems,” said Leonard. “We want to find out what they’re already working on and then come work alongside them.”

That attitude has long driven the services provided by Church of the Saviour, both to its congregation and to the community at large. Upward Basketball, a weekend outreach program that serves more than 300 area youths, has made its home at the church for a decade. Breathe Respite, another community service provided by the church, offers evenings out for parents of children with special needs, while ensuring a safe and appropriate environment for their children.

The church also engages in mission work overseas, with a primary focus on the north coast of Haiti, and an ongoing relationship with missionaries in Liberia, Zimbabwe and Cambodia.

The public is invited to attend the anniversary service at 10:30 a.m. on Sunday, Nov. 18, preached by Pastor Emeritus Rev. Dr. Charles D. Yoost, and including worship and musical expressions spanning its nine decades. Church of the Saviour is located at 2537 Lee Road, in Cleveland Heights.

Krissy Dietrich Gallagher is a longtime resident of Cleveland Heights. She is a freelance journalist under contract with the CH-UH communications department.