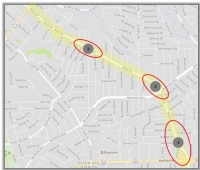 FutureHeights will kick off a planning study of the Noble Road commercial corridor on Oct. 29. The nonprofit community development corporation plans to work in collaboration with Noble Neighbors, the cities of Cleveland Heights and East Cleveland, Northeast Ohio Alliance for Hope (NOAH), residents, business owners and other stakeholders to study the area and develop a market analysis and revitalization plan.

Throughout the approximately nine-month process, FutureHeights will seek input from neighborhood residents and other stakeholders.

The many goals of the study include:

FutureHeights began working with Noble Neighbors in 2017 when the neighborhood group expressed concern about vacant and underutilized properties at the gateway to the neighborhood, at the triangle formed by Mayfield, Noble and Warrensville Center roads. “FutureHeights facilitated two visioning sessions with Noble Neighbors in 2017, where neighbors and stakeholders were invited to participate,” said FutureHeights Executive Director Deanna Bremer Fisher. “It quickly became apparent that a comprehensive plan was needed, and we began to develop an RFP [request for proposal] and search for funding.”

Meanwhile, Greater Cleveland Congregations (GCC), a nonpartisan coalition of faith communities and partners working for social justice in Cuyahoga County, had started a housing initiative in Cleveland Heights, focusing on Noble. Several Cleveland Heights residents, including Diana Woodbridge, former head of Home Repair Resource Center (HRRC), had been researching problem houses in Noble and organized a meeting at HRRC with U.S. Bank, the city, and other entities. At the meeting, FutureHeights shared its proposal.

“We are grateful to GCC for engaging U.S. Bank in its work, and to U.S. Bank for its commitment to funding the study in its entirety,” said Fisher. “We are also grateful for the cooperation and partnership of the cities of Cleveland Heights and East Cleveland; NOAH (North East Ohio Alliance for Hope), which serves as a community development corporation for East Cleveland; GE Lighting; and Noble Neighbors.”

In June 2018, at the request of U.S. Bank, FutureHeights issued the RFP for the planning project. FutureHeights and its partners selected Camiros, Ltd., a nationally recognized urban planning firm, and The Riddle Company, a real estate and economic development marketing consulting practice, from among seven applicants in August.

The study will kick off Oct. 29 and 30, when representatives of Camiros and The Riddle Company will meet with FutureHeights and its partners, tour the neighborhood and begin to meet with residents and stakeholders. A 15-member steering committee will help guide the work. Several community meetings and one-on-one interviews will be scheduled throughout the process to hear from residents about their ideas for the neighborhood and get feedback on initial plans.

“FutureHeights encourages all residents to become engaged in order for the project to be a success for the neighborhood,” said Fisher.

Sruti Basu is the director of community-building programs at FutureHeights.