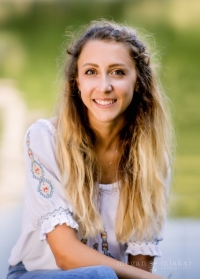 Two Heights High graduating seniors, Eva Bambakidis and Matthew Fields, will perform with the Heights High Symphony, under the direction of Daniel Heim, in the CHHS Instrumental Music Department's (IMD) Season Finale Concert II, on Friday, April 27, at 7:30 p.m. Bambakidis will play the third movement of Dmitri Kabalevsky's Concerto No. 3 in D for Piano and Orchestra. Fields will perform the first movement of Concerto No. 9 in B Flat for Violoncello and Orchestra by Luigi Boccherini.

Bambakidis began studying piano as a 7 year old in Phoenix, Ariz. She continued her classical training in Cleveland with Mary Lambert and later with Emily Grabinski. She currently studies with Natsumi Shibagaki. Bambakidis has also played cello since fourth grade, taking lessons from Julie King at The Music Settlement. Bambakidis has been a recipient of The Music Settlement Fund for the Continuation of Musical Study for six consecutive years. She is playing in her third season for the Contemporary Youth Orchestra at Cleveland State University, and currently sits fourth chair.

At CHHS, Bambakidis is a cellist in the Heights High Symphony, and occasionally plays piano or percussion for Symphonic Winds. During her sophomore year, she was recruited as a pianist for the jazz ensemble and began studying jazz theory under Greg Slawson. Bambakidis has also been a member of the marching band, and serves as the corporal of the trumpet section. She has participated in the Tri-M Music Honors Society for two years, and is its vice president of finance. Bambakidis is also a member of the National Honor Society, and joined swim team her senior year. She is planning to pursue a career in medicine, and starting college this fall.

Fields began his cello studies with Pamela Kelly at the age of 6, and currently studies with Martha Baldwin, a member of the Cleveland Orchestra. He has participated in master classes with Mark Kosower, Brett Mitchell, Matt Haimovitz, Paul Kushious and Peter Salaff. Fields is in his fourth season with the Cleveland Orchestra Youth Orchestra, where he has served as principal and assistant principal cello since the 2015–16 season. He is also a member of its Advanced Performance Seminar.

Fields has participated in several major instrumental groups outside of Cleveland, including the Interlochen Arts Camp, the Indiana University Summer String Academy, and the Green Mountain International Chamber Music Festival. In 2011, he was the winner of the Cleveland Cello Society Elementary Division, and in 2016 was a co-winner in the High School Division. Fields has recently performed as a soloist with the orchestras of the Cleveland Institute of Music and the Suburban Symphony. In college, Fields plans to pursue a degree in music performance.