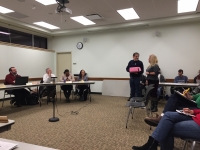 Jack Valancy and Brady Dindia present the board with LOIs and peace symbol cookies from Coventry P.E.A.C.E. Campus.

The Cleveland Heights-University Heights Public Library System voted to accept from the school district the transfer of the former Coventry school property, including the school building, playground and greenspace, at a special meeting of its board of trustees on Feb. 5.

James Roosa, library board member, introduced the resolution authorizing the library to execute an agreement to purchase the property and negotiate and sign leases with the tenants. The motion was seconded by Board Member Chris Metrek, and passed unanimously.

The CH-UH Board of Education (BOE) will vote on the matter at its next meeting, on Feb. 20, and the transaction will close on March 31. BOE members Malia Lewis, Beverly Wright and Jodi Sourini were in attendance, as was George Petkac, the school district’s director of business services and operations. Current tenants of the Coventry building have signed Letters of Interest (LOI) to negotiate leases with the library.

Coventry building tenants Brady Dindia, president of the Artful Board of Directors, and Jack Valancy, Ensemble Theatre board member, expressed their gratitude and presented the LOIs and peace symbol cookies to the library on behalf of Coventry P.E.A.C.E. Campus member organizations. Erick Kauffman, president of Coventry P.E.A.C.E. Park, the nonprofit that built and maintains the Coventry playground, said he was looking forward to working with the library as it seeks to rebuild and refresh the playground and park.

Another tenant, Amy Rosenbluth, director of Lake Erie Ink (LEI), expressed her appreciation to the library, stating that it was Heights Libraries Director Nancy Levin who, when she was teen services librarian, had partnered with Rosenbluth's organization to bring about the first teen poetry slam. She also noted that the library had given LEI its first home, at its Lee Road branch, before it was able to secure office space of its own.

Several community members spoke in favor of the transfer, saying that the arts center will attract young families and add to the vitality of the neighborhood. Longtime Heights resident Ray Lesser, who owns the Funny Times along with his wife, Sue Wolpert, commended the library’s action, saying that the library board had the vision to “reimagine what a library can be in the 21st century.”

Heights resident Charles Drake asked if the library board was prepared to cover the costs of operating the building, and Regina Kupecky expressed concern about the condition of the building. Library Board President Abby Botnick replied that the board had done its due diligence and was prepared to address the issues. Levin stated that, although the roof of the building had been known to leak and would need to be fixed, the concrete block and steel structure was both safe and sound. She added that “the playground was a priority.”

Deanna Bremer Fisher is executive director of FutureHeights and publisher of the Heights Observer. FutureHeights is a tenant in the Coventry building and a member of Coventry P.E.A.C.E. Campus.