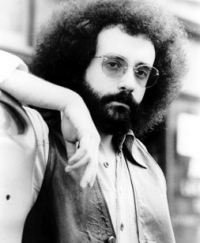 David Budin, hanging out in Coventry Village in the 1970s.

Congratulations to David Budin, whose column “There goes the neighborhood—again” (June 2016) was awarded 2nd place for general interest columns in the All Ohio Excellence in Journalism competition, hosted by the Press Club of Cleveland. It’s one of the most competitive categories in the contest, which is open to every daily, weekly and monthly newspaper, magazine and news website in Ohio.

The first article Budin ever wrote for the Heights Observer appeared in April 2008—the paper’s inaugural issue. Since then, he’s written something for nearly every issue. Much of it has been about the arts—music in particular, which is his first love.

Over time, his regular contributions evolved into “Songs and Stories,” a near-monthly column that seems to put a finger on “Heightsness” (my word, not his)—that intangible, defining quality that makes this community unique.

Budin doesn’t do it for the money. As with every other Observer contributor, he’s unpaid.

“There goes the neighborhood—again” talked about people who see the recent opening of tattoo parlors in Cleveland Heights as a sign of the city’s decline. Budin pointed out that he was one of those hippies who hung out on Coventry in the late 1960s—which was also seen as evidence of the neighborhood’s decline. And yet, Budin noted, Coventry’s identity as a hippie hangout has propelled the community for the past 50 years.

It was more artful the way he wrote it, which is why it just won an award, and why you might want to go back and read it yourself here: http://bit.ly/honeighborhood.

Budin has volunteered since the first days of the Heights Observer as a writer, editor and member of the advisory committee. But it’s worth pointing out that nobody asked him to write a monthly general-interest column. Like all of our regular contributors, he made it happen by finding something meaningful and local to say month after month, doing the work to produce it, and then submitting it for consideration.

He understands the Observer as a public platform—a soap box. Anybody is welcome to step up and use it to discuss issues, share ideas and offer thoughts on life in Cleveland Heights and University Heights.

Congratulations to David Budin. We’re thankful to him and all our other regular contributors who step up to share their reporting, passion and insight.