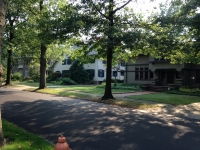 Ambler Heights, for many decades unofficially known as the neighborhood of Chestnut Hills, is one of Cleveland Heights’ first developments, as well as one of the first Cleveland Heights neighborhoods nominated to the National Register of Historic Places as an historic district.

The tract was named for Dr. Nathan Hardy Ambler, a dentist who became a real estate developer. Comprising five streets, Ambler Heights—part of which is in the city of Cleveland—includes more than 60 large, architect-designed homes, built from the 1890s through the 2010s.

Judson Park, a senior-living complex, started out in the former Warren Bicknell mansion, built in 1921.

The earlier houses tend to display Georgian Revival, English Colonial, Tudor Revival, Arts and Crafts, and Mediterranean-influenced features, and include several examples of Prairie School architecture. The most recently built homes—from the 1990s on—are among the most creative moderns in Greater Cleveland.

This leafy neighborhood of winding streets is quite private and only reachable by vehicle coming from Cleveland on Cedar Glen Parkway and from North Park Boulevard. The view toward downtown Cleveland, from the bluff behind the houses along the west side of Chestnut Hills Drive (all in Cleveland), is spectacular.

Ken Goldberg is a member of the Cleveland Heights Landmark Commission, which preserves and protects buildings, works of art and other objects of historical or architectural value to the community. The seven members are appointed to three-year terms by CH City Council.