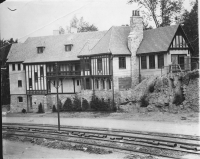 The Barton R. Deming House under construction in 1914. Photo courtesy of Cleveland Historical.

The Euclid Golf Historic District—on the National Register of Historic Places—is one of Cleveland Heights’ older suburban developments. It was created on land owned by John D. Rockefeller and leased to the Euclid Club. The majestic Tudor Revival clubhouse, which stood for only about a decade, was situated approximately where Cedar Road meets Norfolk Road today. The historic district, centered on Fairmount Boulevard between Cedar and Coventry roads, includes the Fairmount Boulevard Historic District.

Barton R. Deming began developing the Euclid Golf district in 1914. His own house is the picturesque European-looking structure set in the hillside at the beginning of Fairmount Boulevard at Cedar Road.

The styles of the residences seen in Euclid Golf—which is primarily residential with the exception of St. Paul’s Episcopal Church and the commercial building along Fairmount Boulevard within the Cedar Fairmount district—are mainly of Tudor Revival, Georgian Revival, English Colonial and French Norman design. The streets off of Fairmount contain less expensive yet stylish homes.

Most of the more-impressive residences are along Fairmount Boulevard. Streets here are winding and sport British names. Homes on streets off of Fairmount Boulevard are closer to the street than in some Greater Cleveland neighborhoods with comparable homes—creating a more-intimate setting for each.

Hugh Fisher, co-nominator of Euclid Golf as a National Historic District in the National Register of Historic Places, stated that he feels living in the district is special because it is recognized as historically significant, and this encourages residents to take better care of their properties and be particularly sensitive to maintaining the historic fabric. He added that Euclid Golf “is unusual in that it was a well-planned development that was nationally known [when first developed] and it was essentially completely realized prior to the Depression, so there are few properties that came later. Today it is mostly completely intact and unaltered.”

Check out Euclid Golf Neighborhood by Deanna Bremer and Hugh Fisher at www.euclidgolf.com.

Ken Goldberg is a member of the Cleveland Heights Landmark Commission, which preserves and protects buildings, works of art and other objects of historical or architectural value to the community. The seven members are appointed to three-year terms by CH City Council.

6:30 PM - Parks and Recreation Advisory Board