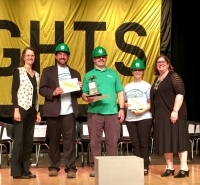 The winning team—spellers Victor Rosenberg, Susan Beatty and Chris Mentrek—took home the Big Plastic Bee trophy, which will be on display at the Lee Road Library until next year, and gift certificates to the Blossom Music Festival and Dewey’s Pizza on Lee Road. The Noble teams’ fans won Best Cheering Section, and the Fundraising Champion again this year, collecting more than $1,000, was Upper Case, the team representing Case Western Reserve University.

The competition was strong, with only four teams leaving the stage in the first three rounds. Seven teams took advantage of round three—the Musical Round—opting to musically perform the spelling of their word, which excused misspellings. Then, four teams left the stage in round five, and four more in round six, leaving three teams standing in the seventh and final round.

It was an exciting finish to an evening that included music from Broken Strings, a violin duet that played during the Pre-Bee Spellers Dinner; the Heights High Marching Band drummers, who led the parade of spellers into the auditorium; and the Heights High Barbershoppers, who sang during the fourth-round break.

Steve Presser, owner of Big Fun, was the bee’s Master of Ceremonies for the 22nd year; Nancy Levin, director of Heights Libraries, served as Pronouncer for the seventh year; and Steve Titchenal projected the words for the audience for his 24th year. Judges were Sandy Womack, the CH-UH school district’s director of principal leadership and development; Talisa Dixon, district superintendent; and Brian Jung, the parent of a Heights High student.

Reaching Heights expressed gratitude to the school district for use of space in Heights High and for the services provided by the stage crew and custodial staff, and to the local businesses that provided food, paper goods, raffle baskets and winners’ prizes, including: Stone Oven, Zagara’s Marketplace, Heinen’s Fine Foods, Mitchell’s Ice Cream, the Cleveland Orchestra, Dewey’s Pizza, Grog Shop, Big Fun, The Funny Times, Starbucks, and Atma Center.