Auerbach-Brown is a 2016 Creative Workforce Fellow 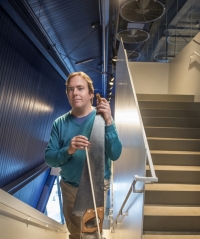 He is a sound artist and composer, and a member of Trepanning Trio, an acoustic instrumental group that has released three CDs, and the Quiet Trance Ensemble, a group that holds community improvisation evenings. He is also the conductor of the Amati Chamber Orchestra, a string ensemble at The Music Settlement, and he has taught music classes at various schools in the Cleveland area, including The Music Settlement, Lakeland Community College and the Cleveland Institute of Art.

Auerbach-Brown was named a Creative Workforce Fellow at the beginning of 2016 by the Community Partnership for Arts and Culture (CPAC). “It’s basically a project-based grant,” he explained. “You propose an artistic project that can connect you to the Cleveland community.” His project was musical performances that combine experimental music with audience involvement. “We did a show at Spaces in September,” he said. ”We asked people to bring something to the show that could make noise, and we figured out how to incorporate their sounds into our music.”

Auerbach-Brown, 46, was born in Rochester, N.Y. When he was 3, his family moved to Geneva, in the Finger Lakes section of central New York. He stopped taking guitar lessons from his father when he was in fifth grade; three years later, he started singing in his school choir. “I took a state-mandated, musical-aptitude test,” he said, “and my score was very, very high.”

As a result, he started playing French horn, and then saxophone, about six months later. “When I was in high school,” he said, “I learned how to play about 10 instruments.”

After graduating from high school, Auerbach-Brown attended Ithaca College, where he earned a bachelor’s degree in music composition. “During my freshman year, I took some group-composition classes and really learned the basics about writing music,” he said. “I really got into composition.”

He then came to Cleveland, where he received a master’s degree in music composition at the Cleveland Institute of Music. “A professor at Ithaca recommended that I go there,” he said. “And it was really great. I studied with Donald Erb, who was an American composer who did large, orchestral works.”

Auerbach-Brown currently lives in Cleveland Heights. His wife, the former Deby Auerbach, is from here. (When they married in 1997, they decided to hyphenate their last names.) They have two children, Caleb, 13, and Caroline, 10. They also have a cat, Isabel, who Auerbach-Brown says is like a guard dog. “If a stranger comes onto our property,” he said, “Isabel starts acting like a dog.”

Cleveland Heights seems like a good fit for Auerbach-Brown. “I like the community feel here,” he said. “It’s a very multi-cultural community, and it’s close to University Circle, which I love. And there are a lot of creative people here. It’s a strong artistic community.”