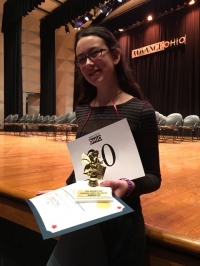 Bruce finished as runner-up (second place) out of the 44 seventh- and eighth-graders who competed for the opportunity to represent Cuyahoga County at the Scripps National Spelling Bee in late May. She won a trophy and $100.

Andrew France, a homeschooled student from Chagrin Falls, won—for the second year in a row—but not before Bruce showed him some serious competition. The two went head-to-head in the last 10 rounds.

Beth Woodside is a violinist with the Cleveland Orchestra, and is on the violin faculty of The Music School Settlement. She is a Reaching Heights board member and Roxboro Middle School spelling bee coordinator.