by Brenda H. May 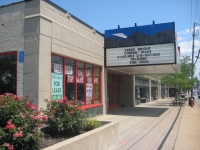 The Center Mayfield Building has been mostly vacant for several years. This photo was taken in 2013 by FutureHeights intern Kendra Dean during a survey of vacant storefronts conducted by the organization in 2013.

The Center Mayfield Building may be demolished if the property owner does not find a buyer who is willing to preserve this historic building at the eastern gateway to Cleveland Heights.

Circle K representatives have submitted an application to Cleveland Heights City Council to rezone two residential properties on Vandemar Street. In addition to demolishing the houses, Circle K intends to tear down the Center Mayfield Building, which includes a former movie theater and spans Mayfield Road from Vandemar Street to Noble Road, to build a 16-pump gas station and convenience store on the property. The footprint for this development would be significantly larger than the BP gas station and convenience store located just one block east on Mayfield Road in Cleveland Heights.

At the Feb. 1 Cleveland Heights City Council meeting, residents who live near the site voiced their opposition to the environmental, light pollution and noise impacts of the proposed demolition and re-development, citing several research sources. Other residents voiced concerns about quality of life, property values, and traffic and safety issues.

Almost all of the speakers described their appreciation for the historic building, with its walkable neighborhood curb appeal. Many cited specific businesses they had patronized at the site, until they were vacated recently.

Residents understand the need for development planning for the "Triangle”—the district bounded by Mayfield, Noble and Warrensville Center roads. Some suggested restaurants or arts-related businesses, while others offered retail-residential ideas.

The overwhelming sentiment expressed by residents is that they want to be involved with the city, property owners and developers to find businesses that will thrive and that will support the strong neighborhood vibe. They echoed the priorities published in the Cleveland Heights Community Vision draft document that the Master Planning Steering Committee published on Jan. 22, regarding vibrant neighborhoods and an environmentally sustainable community.

This new effort to save a historic building and maintain the integrity of the neighborhood recalls the successful grassroots campaign that stopped a large Giant Eagle grocery store from dead-ending Grandview Avenue and radically altering the Cedar Fairmont neighborhood in the early 2000s. Through the efforts of community members, Cedar Fairmount was able to maintain its pedestrian-scale architecture and walkable neighborhood appeal.

Residents who live near the Center Mayfield property are hoping that the wisdom and experience of such community organizers will help find the resources to restore the historic building and maintain the integrity of the Mayfield/Noble/Warrensville Triangle neighborhood. For more information, visit www.nobleneighbors.com.

A public hearing on this rezoning request will be held on March 3, at 6:30 p.m., in Council Chambers at Cleveland Heights City Hall.

Brenda H May is one of the leaders of Noble Neighbors (www.nobleneighbors.com).