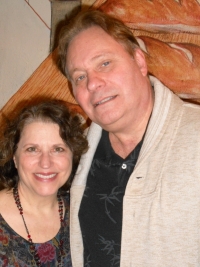 Dan and Nancy Maier have both been playing piano since they were about eight years old. Now, more than five decades later, music still is the focus of their lives.

Dan, 62, is a member of several Cleveland-area bands, including the North Coast Jazz Collective and ProgNation, a relatively new progressive-rock group that covers songs by such bands as Yes, Genesis, and Emerson, Lake and Palmer. Nancy, 63, is the associate artistic director of the Musical Theater Project, an organization that presents classic American musicals in Greater Cleveland. She is also a part-time music director and vocal coach at Baldwin Wallace University’s Conservatory of Music.

The Maiers, who have lived on Meadowbrook Road in Cleveland Heights since 1992, are the parents of a daughter, Hannah, a 19-year-old freshman at Baldwin Wallace.

Dan grew up on the East Side of Cleveland, primarily in Garfield Heights. He attended the Berklee College of Music and the New England Conservatory of Music, both of which are in Boston. He met Nancy at one of his shows in the early 1980s, and they married in 1982.

The Maiers decided to move to New York City. “We just thought that there would be more opportunities to play music in New York,” Dan said. Shortly after arriving in New York, he started playing with Blood, Sweat and Tears. “I worked with them for about a year, and I spent a lot of time on the road with them,” he said. Over the years, Dan has played with many famous musicians, including Smokey Robinson, Gladys Knight, the Temptations, the Mills Brothers, and Leslie Gore. He also toured with Philip Glass.

Nancy got involved with music directing while she and Dan were in New York. “That’s where I really started understanding that I love music directing and vocal coaching,” she said.

In 1989, they decided to return to Cleveland, and Nancy began working in various theaters as a music director. Over the years, she has directed music at Cain Park, the Great Lakes Theater, the Cleveland Play House, the Beck Center and Karamu House. In 1996, she got a job as the music director and vocal coach at the Baldwin Wallace Conservatory of Music, under the direction of Victoria Bussert. “The Baldwin Wallace program has a great reputation across the country,” she said. “The graduates from that program get hired all over, especially in New York.”

The Maiers said they love Cleveland Heights. “After living in New York for so long, we wanted to live somewhere that was near to cultural centers,” Nancy said. “Cleveland Heights is so close to University Circle, and there are so many artistic centers here, as well as great clubs like Nighttown.” Dan frequently plays at Nighttown. Over the years, he has appeared with Cheryl Bentine of the Manhattan Transfer, Alexis Cole, Jackie Ryan, Ann Hampton Callaway and many other famous artists.

Both of the Maiers have shows coming up in the next several months. On Feb. 14, Nancy will be performing with the Musical Theater Project at Vosh in Lakewood, which will present Anything You Can Do: The Big Battle of the Sexes.