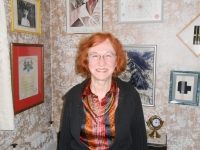 Cleveland Heights resident Sarah Taylor is focused on making the world a safer, healthier place. In 2006, she formed Windustrious Cleveland. Its goal is to create a wind farm off the shores of Lake Erie and use wind power to replace fossil fuels as a source of energy in this region.

“Although the use of fossil fuels powered the industrial revolution, their time has now come and gone,” Taylor said. “We realize that we are inflicting tremendous harm on our atmosphere and climate with our continued usage of those fuels, and we should change course as fast as possible. The planet and its living organisms are being rapidly damaged, with some of those life forms already beyond repair.”

Taylor, 73, first became interested in energy back in 2002, when she got to know some of the construction workers who were building the Peter B. Lewis Building on the campus of Case Western Reserve University. “I realized we were a wonderful manufacturing center, and, at the same time, we could address some of the world’s needs,” she said.

In 2006, Taylor started talking to the Cleveland Foundation about her idea to use the winds of Lake Erie as a source of power for the region. “I thought we should try and focus on using what we have at our doorstep,” she said. “If this planet is to survive, we need to make use of the free energy that’s out there—free, everlasting and clean.”

Ronn Richard, president of the Cleveland Foundation, brought in Bill Mason, Cuyahoga County prosecutor, and together they formed the Great Lakes Energy Development Task Force and initiated studies. In early 2007, in front of a Windustrious video, the task force announced it would be concentrating its efforts on establishing an offshore wind project. After further studies, in 2009, the task force created the Lake Erie Energy Development Corporation (LEEDCo), a private, nonprofit regional corporation, to initially build wind turbines in Lake Erie and eventually help stimulate an entire offshore freshwater wind industry.

In 2010, Sweden built the world’s first freshwater wind farm on Lake Vanern. If LEEDCo is successful in creating such a windfarm in Lake Erie, it would be the first in the United States.

The Ohio Senate delivered a blow to the project, however, when it passed Senate Bill 310 in 2014, which put a two-year freeze on Ohio’s renewable and energy-efficiency standards. The bill stopped providing incentives to investors and utilities for using wind power. Scientists throughout the United States wondered aloud why Ohio chose to be the first state to renege on its renewable standards.

Taylor is optimistic that a freshwater wind farm will eventually become a reality here. A native of England, Taylor grew up in Torquay and studied zoology at London University. In 1964, when she was 22, she was offered a job as a research assistant in the biology department at Western Reserve University, and moved to Cleveland. She has lived here ever since. “I fell in love with America,” she said. “I love the combination of innovation and inclusiveness. In the U.S., it matters who you are, not who your father is.”

Her husband, Philip Taylor, also grew up in England. They met in Cleveland and married in 1966. He is a professor of physics at Case Western Reserve University. They have two daughters, Camilla, 45, and Imogen, 42. Taylor and her husband bought their house on Meadowbrook Boulevard in 1969, and have lived in Cleveland Heights ever since.

More information about Windustrious can be found at www.windustrious.org. Taylor hopes readers will view, and share, a four-minute video she put on YouTube earlier this year called "Our Windustrious Future." The more clicks the better, said Taylor, to help spread the word—and the enthusiasm.