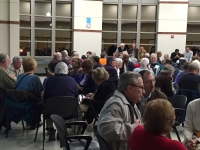 Severance Town Center—the shopping center located at the intersection of Mayfield and Taylor roads in Cleveland Heights—has been deteriorating for much of the past decade. On Oct. 21, about 200 people attended a forum at the Cleveland Heights Community Center to discuss the future possibilities of Severance.

FutureHeights presented the forum, which featured presentations by five people, including three members of the FutureHeights Civic Engagement Committee. The forum’s attendees also shared their thoughts about what could be done with the Severance area.

Vince Reddy, a project manager at LAND studio and a member of the FutureHeights Board of Directors, opened the program by giving the history of Severance.

Severance Town Center opened in October 1963, and was the first fully enclosed shopping mall in Ohio. When it opened, it contained two major department stores—the Higbee Company and Halle Bros. Company—as well as a Fisher Foods grocery store and a Woolworth’s discount department store. The shopping center was built on property that had been owned by John L. Severance, a Cleveland industrialist and philanthropist. His family’s house was demolished in 1959, and construction on the mall began in 1962.

Eventually, Dillard’s took over the two department stores, and, in 1995, closed them. Later that year, the anchor stores were demolished. Then, in 1998, the enclosed mall was also demolished, and Severance became an open-air "power center."

Recently, many more stores have closed, including Walmart, which closed its store at Severance in 2013 and relocated to Warrensville Center Road in South Euclid. In 2011, the Borders bookstore chain closed all of its stores, including one at Severance, and in March 2015, Regal Cinemas closed its movie theater at the shopping center.

Only a handful of stores are still located at Severance, including Home Depot, OfficeMax, Marshall’s and Dave’s Market. Cleveland Heights City Hall is on the property, as is a U.S. Postal Service office and a couple of medical buildings.

After Reddy’s presentation, Roger Bliss, a builder and developer who specializes in pedestrian-scale urban design and mixed-use projects, talked about what has been done with other shopping centers across the country that have undergone the same problems Severance is going through. He started by talking about a project in Lakewood, Colo., and also talked about Parmatown Mall, which has been redeveloped over the last two years. “These projects are very complicated, and they can take a long time, but it can be done,” Bliss said.

Bob Brown, a former planning director for the City of Cleveland and a resident of Cleveland Heights, then presented ideas for the future of Severance. He discussed a 2007 project of the Kent State University (KSU) Urban Design School. The KSU students recommended improving the interface between Severance and adjacent neighborhoods and improving the interface with Mayfield and Taylor roads. He also discussed ideas that have been suggested on the Next Door website, including replacing Severance with a sustainable farmers market, creating a technology business that could be located in the space, and developing a mixed-use center with retail stores and restaurants, as well as housing. Other suggestions included focusing on arts and culture by creating a center for artists, building studios and galleries and using the vacant theater as a performing-arts center; starting a flea market; building an outlet mall, and using the space for more recreational activities, such as roller skating and bowling.

The next speaker was Peter Rubin, president and CEO of the Coral Company, which developed the Courtyards Townhomes in Cleveland Heights. “This is an amazing opportunity to change the landscape of Cleveland Heights for many generations,” he said. “It’s a fantastic opportunity.” He added that the city and its residents must determine what they want to express through the re-development of Severance. “We must have a set of values,” he said, adding that “no project of this scale can be accomplished without public investment—the city, the county and the state must all invest in this project. Now is the time to think big.”

Finally, the audience divided into small groups and was asked to answer three questions: What is the best use of Severance that will enhance Cleveland Heights and build its character? What ideas from other cities might work for Severance? What questions need to be asked in considering the future of Severance?

Many members of the audience said they thought that the area should be a walkable, inter-generational, self-contained village. Other ideas included meeting the needs of senior citizens by developing one-story townhouses, and making the area walkable and bikeable with places to sit. Members of the audience also liked the idea of creating an area with more recreational activities, including a roller-skating rink, an ice-skating rink and a dog-walking park.

FutureHeights has placed a video of the entire forum on its website, www.futureheights.org. In addition, a survey for residents to share their thoughts about potential futures for Severance is available now through Nov. 4 at www.surveymonkey.com/r/severance_ideas.

FutureHeights also plans to follow up with the Cleveland Heights Master Plan Steering Committee, which is working with city staff and the Cuyahoga County Planning Commission to develop a master plan for the city.