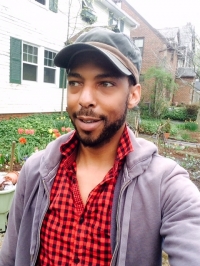 When my friend Joan told me about Burnt Toast Farms & Studio, we both thought the name had to have some hip meaning that eluded us simply because we were too old. Founder Jason Eugene-Boardé laughed out loud at this suggestion, explaining that he chose the name after reading an article about what to do with burnt toast, thinking it would make a good name for his farm and creative community space.

The name is an apt symbol for what Boardé values—using what he has no matter how humble—such as planting on the roof of the garage, in gutters attached to the wooden fence, in pallets attached to the walls of the house, and growing vegetables and flowers on what was the front lawn. Burnt Toast Farm is also a tango studio, a Sunday brunch venue and a place where you can learn to make a broom. Burnt Toast Farm, located at 2972 Yorkshire Road, is a typical Cleveland Heights home on a typical Cleveland Heights street, occupied by a very unusual person, who really lives “out of the box.”

Boardé grew up in South Euclid in the 1980s and ‘90s. He attended the Cleveland School of the Arts and studied dance with Bill Wade, artistic director of the YARD (Youth at Risk Dancing).  Wade and his wife, Kristen, had a profound influence on Boardé, and he sees many of the activities he engages in as a way of giving back, after receiving so much from them.

Boardé is one of the leaders of the Black Lives Matter movement in Cleveland, and works with the Children’s Defense Fund. His interests include community development, social justice, youth mentorship and environmental education.

Boardé’s interest in what he calls “homesteading” began in Los Angeles during the economic downturn. He lost his job, as did his housemate. They realized they needed to become more minimalist and self-reliant. They grew their own food and had such a surplus that they were able to donate food to the Jewish Family Services Association, the Los Angeles Mission, and other local charitable groups. He met other homesteaders with similar values. During this difficult economic time he was introduced to Buddhism and discovered meditation as a way to find answers within rather than seeking them outside of himself. This has had a profound influence on his life.

When Boardé’s father had a heart attack two-and-a-half years ago, he decided to return home to Cleveland. He describes himself as a shy person who loves domesticity, privacy and home, but realized that it was time to challenge himself and open his home—and himself—to the world, to develop a community of like-minded folks. He feels humbled by the welcome he has received from neighbors on his street, and the Grant Deming's Forest Hill community, and noted that people from as far afield as Mentor and Westlake came to his first monthly Sunday brunch.

“There is something special and beautiful about Cleveland and especially Cleveland Heights. It’s held its value and aesthetic, and it feels like home to me,” said Boardé. “This is exactly how I remember the Heights. Coventry was my old stomping ground. My first job was at the Winking Lizard, my first apartment was on Coventry, and La Cave du Vin still is one of my favorite haunts."

“I love the sense of community and diversity found in Cleveland Heights. It feels like living in France with its laissez-faire attitude; you can do your own thing without being judged or bothered, pretty much. It’s comfortable, walkable, well-managed and safe, for the most part. The residents take pride in their town. Being part of this community puts a smile on my face,” said Boardé. “There’s an energy here, too, that I love, and the beauty of nature adds icing to the cake.”

Jan Kious has lived in Cleveland Heights since 1974, and, with her husband, raised four children here. She is interested in people in the Heights community who fit the description of living "out of the box."


Monday, December 5:
10:00 AM - Public Safety and Health Committee of Council