Harry Bacharach has a lifelong love of music 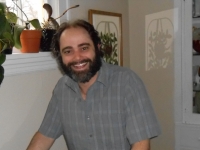 Harry Bacharach at his home in University Heights.

Harry Bacharach started taking piano lessons when he was in first grade at Noble Elementary School in Cleveland Heights. Now, more than three decades later, he is a professional pianist and singer who plays all around Northeast Ohio.

Bacharach, 39, grew up in Cleveland Heights. His birth name was Ari Friedman. In addition to attending Noble Elementary, he also went to Monticello Middle School and Heights High, and sang in the choirs of all three schools. He dropped out of high school during his sophomore year, attended Taylor Academy in Cleveland Heights and then got his GED. He then attended the University of Oregon in Eugene, where he studied anthropology.

When he was a child, his parents were into music. “They always sang a lot,” said Bacharach. “They would sing at dinner, and that got me interested in music.” He took piano lessons for two years, and his father taught him some piano chords. When he was 15, he started playing bass guitar. After dropping out of high school, he and a friend formed a band called Herb ‘n Rhythm.

In addition to music, Bacharach also liked baking. When he dropped out of high school, he started working at a bagel store, and when he was in Oregon, he worked at a bakery. After college, Bacharach moved to Brooklyn, N.Y., where he had six different baking jobs.

When he returned to Cleveland, in 2001, he took a job at On the Rise, the bakery that had just opened on Fairmount Boulevard in Cleveland Heights. In 2002, he decided he wanted to start playing music again.

“Once I realized I couldn’t get solo gigs playing bass, I decided to go back to piano,” he said. He started taking lessons from Greg Slawson, a Cleveland Heights piano teacher. He also had informal lessons with several Cleveland pianists, including Joe Hunter, George Foley and Jackie Warren.

After a few years of lessons, Bacharach started playing at various locations around Cleveland, including the Barking Spider Tavern and That Place on Bellflower, located in the space now occupied by L’Albatros Brasserie & Bar in University Circle.

He also decided to change his name. “I was thinking about musicians like Harry Connick and Harry Belafonte and, of course, Burt Bacharach,” he said. “I always say that I am Burt’s great nephew, but that he’s not my great uncle! So that’s how I came up with my name.”

In 2010, Bacharach was wrapping up a show at Nighttown when someone from the Ritz-Carlton Hotel called and said that Stevie Wonder wanted to come to the restaurant and get dinner. Nighttown asked Bacharach to stay and play music for Wonder while he ate.  “It was really amazing,” Bacharach said. “Stevie got up and sang ‘Imagination’ with me, and then I got to hang out with him.” Wonder asked him to write a song for his daughter’s birthday. “Stevie had written ‘Isn’t She Lovely?’ about his daughter, so I wrote a song called ‘She Most Certainly Is.’”

Bacharach had a similar experience in 2009. He was playing at Bice Ristorante, which used to be at Tower City in downtown Cleveland. Barry Manilow was performing at the Quicken Loans Arena, and after the concert he came to Bice for dinner. The restaurant asked Bacharach to stay and play for Manilow. “I was playing ‘And the Angels Sing,’ a Benny Goodman song, and Barry came over and started talking to me,” Bacharach said.

Bacharach now has several regular gigs around town. Every Wednesday he plays at Bin 216 in Playhouse Square. On Thursday nights, he plays at the Paris Room in Chagrin Falls, and every Friday he performs at Marotta’s on Lee Road in Cleveland Heights. On June 13, Bacharach will perform at Nighttown.

He also performs regularly at several old-age homes around Cleveland, and he does private events.

Bacharach lives with his girlfriend, Stacy Siddle, on Raymont Boulevard in University Heights. They have a dog, Marge, and two cats, Ponch and Leon. “I love the diversity of the Heights area,” he said. “And I love being so close to Cain Park. I take my dog over there for walks almost every day. I also love the fact that I can play gigs all around the area and make a living at it. I’m just as fortunate as can be.”