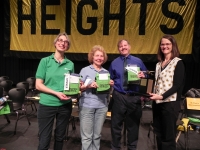 The competition was fierce, lasting into an intense eighth round with three teams still vying for the win—last year’s defending champions, the Know Nothings, representing the Heights High PTA; Upper Case, representing faculty and staff at Case Western Reserve University; and Dewey’s Decimators.

The 20 teams that competed this year represented school and community groups who all contributed funds to join the event. Those funds support the programs of Reaching Heights, whose mission is to mobilize community resources to foster highly valued public schools, and whose programs include elementary school tutoring, role models who speak to school groups, a program that supports families whose children have special needs, and encouragement for school music programs, and efforts to honor our school district’s teachers and other staff.

[Click on this link to view a photo gallery of the event, and pick up a copy of the May issue of the Heights Observer—available May 1—to read a longer article about this annual community event.]