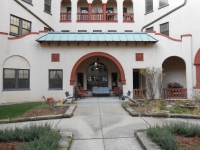 The courtyard at the Alcazar.

The Alcazar, the historic apartment building and hotel located at the intersection of Surrey and Derbyshire roads in Cleveland Heights, has a new owner, and, as a result, some changes will be coming to the building. Montlack Realty bought the Alcazar for $1.4 million on Sept. 22.

The building currently consists of 184 units: 62 apartments, all of which include a kitchen and a bathroom, and 122 lodging units, which have bathrooms but no kitchens. According to Kirt Montlack, 48, whose family owns the real estate company, the plan is to eliminate the lodging units and increase the number of apartments to 96.

Montlack said the company will install new and larger kitchens in all of the apartments, as well as bigger, more modern bathrooms. The changes, which require the approval of the Cleveland Heights zoning board, will take place over the next year and a half. The company also plans other upgrades, including replacing much of the carpet, and painting much of the building’s interior.

The Alcazar was built in 1923, and it was placed on the National Register of Historic Places in 1979. Architect Harry T. Jeffery based his design on the Hotel Ponce De Leon in St. Augustine, Fla. According to architectural historian Eric Johannessen, the building’s design came about as a result of “the general vogue for Spanish architecture in the 1920s . . . and the Florida boom of those years, especially around Palm Beach and Miami.”

Over the years, many famous people stayed at the Alcazar, including Bob Hope, Jack Benny, Mary Martin, Cole Porter and George Gershwin. Back in the 1920s and ‘30s, single rooms with a bath rented for $75 a month, while furnished suites with hotel service were $150 a month. According to Montlack, once the renovations are completed, he expects rents to be in the range of $550 a month for a studio apartment and $1,500 a month for larger, furnished apartments.

In addition to the apartments, the Alcazar contains several common areas. A ballroom is located on the fifth floor, while the first floor includes a dining room and a music room. There is also a beautiful lobby area, which features a small, shallow pool that’s home to a few live fish. And the outside courtyard includes a fountain that is a copy of one in St. Augustine.

Montlack also said that his family’s company is considering opening a public restaurant in the building, but that would also require a zoning variance from the city. After Prohibition ended in 1933, the Alcazar did include a cocktail lounge called the Intimate Bar.

Montlack said that his family has had a long attraction to the Alcazar, starting back in 1975, when his father opened an office above what is now Dave’s Market in the Cedar Fairmount district.

“We used to look out our windows at the Alcazar and think, ‘Boy, that would be a great place to own,’ ” he said. “But back then they were very secretive about who owned the building.” It turns out that, for the last 51 years, the building was owned by an organization called the Western Reserve Associates. Montlack called from time to time, trying to buy the building, but he never got any response. Then, in September, he heard that the company was interested in selling.

“I think we have a vision of what this building could be, and we really understand the neighborhood,” Montlack said. While many of the current residents are older, Montlack said he expects to rent some of the units to students in graduate school, as well as to recent college graduates.