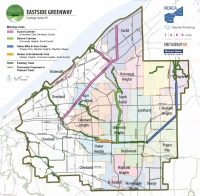 Imagine living close to a trail system that connects neighborhoods throughout eastern Cuyahoga County with employment centers, transit, services and parks. Imagine walking or biking to school, work or the store. Imagine being able to bike from Euclid Creek Reservation to the Shaker Median Trail, or from Rockefeller Park to the North Chagrin Reservation. Imagine the Eastside Greenway.

The Eastside Greenway will increase pedestrian and bicycle connectivity in and between the eastern portion of Cleveland and 18 suburbs, including Cleveland Heights, University Heights, East Cleveland, Shaker Heights, South Euclid and Beachwood. Leaders from these municipalities are working alongside planners and other regional organizations, among them the Cuyahoga County Planning Commission, LAND studio, the Cleveland Metroparks, RTA, the Northeast Ohio Regional Sewer District and Bike Cleveland, to develop a plan for the greenway that can be used to guide implementation.

With planning currently underway, the project team will host a second round of public meetings to share project updates and solicit feedback from the community in early 2015. The same content will be presented at each of the following meetings:

At the meetings, an overview of the project will be provided, as will the results of a completed inventory and analysis. Alternative routes for the greenway network will be presented and the project team will solicit feedback on route alignments and route priorities. This feedback will be taken into account as the plan is finalized in the first half of 2015. A third round of public meetings, in which the final greenway plan will be presented to the public, will take place in May. More information on the Eastside Greenway can be found on the project’s website at www.eastsidegreenway.weebly.com.