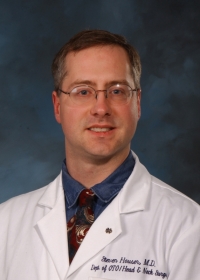 Otolaryngologists—head and neck surgeons—diagnose and treat disorders of the ear, nose, throat, and related structures of the head and neck.

Director of Rhinology, Sinus and Allergy for The MetroHealth System, Houser will lead a national group of approximately 1,700 ear, nose and throat doctors, with 2,300 members overall.

Houser will be president of the AAOA for one year, during which he’ll help the academy respond to allergy issues, such as insurance coverage and government validation of allergy treatment. He will also provide leadership to the AAOA in its mission of supporting its membership “through education, research and advocacy in the care of allergic patients.”

“MetroHealth doctors serve our community but they also serve nationally in their specialty organizations,” said Alfred F. Connors, chief medical officer of The MetroHealth System. “They’re leaders in their fields, and Dr. Houser is a perfect example of that.”

Houser is one of Northeast Ohio’s sole providers of immunotherapy drops and tablets for allergies to cats, dogs, dust, grass, mold, pollen and ragweed.

A Strongsville native, Houser has lived in Cleveland Heights for nearly 20 years.

"I have lived in Cleveland Heights most of my adult life," he said. "Yes, I crossed the river and lived to tell the tale. We enjoy the neighbors and neighborhoods, the parks, the restaurants and the close location to all things in Cleveland."

After graduating from Strongsville High School, Houser went on to the University of Notre Dame and The Ohio State University College of Medicine. He is a fencer, watercolorist, hockey parent and hockey husband—his wife plays as well.

Houser spent his first several years in Cleveland Heights on Rydalmount Road, before moving to St. James Parkway with his growing family.

His wife, Margaret Bigg, also a doctor, is a "huge Cleveland Heights fan," according to Houser, and does her skating at the same Cleveland Heights rink that sons Joey and Teddy used to use. They are now students at Benedictine High School.

Houser sees patients at MetroHealth's Beachwood location, as well as its brand-new Middleburg Heights health center and its main campus on West 25th Street. He can be reached at 216-778-5791.

Jonah L. Rosenblum, a Cleveland Heights resident, is the media relations assistant at MetroHealth, Cuyahoga County's public hospital. Originally determined to live downtown near the ballpark, Rosenblum quickly fell in love with the architecture, greenery and restaurants of Cleveland Heights.