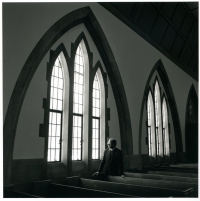 White, who served on the original gallery committee and exhibited his photographs there in 1992, was instrumental in creating an art gallery at St. Paul’s in 1990. He had envisioned the gallery as a gift to the community, for public use. It is therefore fitting that the gallery is now called the Nicholson B. White Gallery.

White enlisted the help of Cleveland architect William H. Collins, a St. Paul’s parishioner, to design what White described as “a gallery and rotunda, a magnificent space, which would be in perfect proportion with the original church.”

Collins recalled sleepless nights thinking about creating a space that would “echo the rest of the building.” He said it was his biggest challenge. The stone that Collins chose was key to the beauty of the addition. The original stone vendor was still in business, and the Indiana limestone from the same quarry used in the nave of the original church was still available. Collins smiled when he recalled that, by dealing directly with the vendor, he saved the church $22,000.

“The whole time I was designing the gallery, I wanted to ensure the flow, and blend it with the existing building. This space had to be functional and be a place where people would like to gather. People have to be in the picture,” he said.

Collins’ imagination was fully at work. The gallery could not be merely a hallway off of which were classrooms, but a welcoming entry from the newly created semicircular driveway into a space that overlooked a courtyard and garden—the focal point of which was Emily Parkman’s bronze sculpture of a mother pelican with her two youngsters overlooking a shallow pond.

Part of the plan included a rotunda, which Collins said would “make a statement," adding, "height was needed to go with the rest of the building.” In its simplicity, the rotunda features an archway and clerestory windows, enabling viewers to see the church’s tower.

Four imposing stone bas reliefs, with the motif of grapes and grape leaves mingled with flowers, originally on an exterior wall of the church, now grace the rotunda. A wood sculpture with the same motif, dedicated to architect John Justin Carr, complements the west wall of the rotunda.

Nick White laughed as he retold the story of a commanding capstone over the entrance to the gallery. The apostrophe was omitted in St. Paul’s, but was fixed by the stonemason who discovered the error.

White applauded the work of Barbara Collins, founder and leader, for 20 years, of what became known as the South Wing Gallery. White described Collins, wife of the gallery’s architect, as “a whiz as the curator.” She had a knack for finding innovative artists and bringing them and their work into the church for the whole community to enjoy. Ed Stevens, a parishioner and early member of the gallery committee, recalled Barbara Collins finding not only exemplary pieces of religious art, but also artists like the one who painted on automobile hoods. And, indeed, those hoods of cars hung on the walls of the then-new South Wing Gallery.

The late Sally Morley and her husband, John, generously donated funds, in honor of their children, to build the gallery.

Mary Krogness, a member of St. Paul’s Episcopal Church, is the author of two books and a PBS television series.